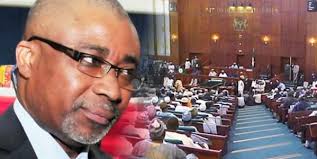 01 November 2017, Sweetcrude, Port Harcourt – The Senate Committee on Power, Steel Development and Metallurgy, has expressed worry over the refusal of electricity consumers in the country, especially in the South-South geopolitical zone of the country, to pay their bills.
Chairman of the committee, Senator Enyinnaya Abaribe, disclosed this when he led six other members of the committee on an oversight  visit to the headquarters of the Port Harcourt Electricity Distribution Company, PHEDC.
Abaribe assured the distribution company of the Senate’s unalloyed support towards the growth of the entire value chain of the power sector.
On entitlement mentality of the host communities, the chairman urged on the execution of Corporate Social Responsibility as a means to curbing vindictiveness.
“The problem is that even where you have meters, people bypass the meters. Not only do they bypass the meters, people go on to refuse to pay for the power consumed..
“That of course is attributed to some sense of entitlement that people have around here that they produce oil, the produce gas and therefore, why should they pay for power.
“That of course is not correct because the oil that is produced taxes are paid on it; the gas that is produced, people also pay taxes and that tax is what is used in the allocation,” Abaribe said.
Earlier, the Acting Chief Executive Officer of PHEDC, Engr. John-Kingsley Achife, flayed the refusal of communities under PHED to accept meters, saying the company has taken up the matter with the Nigerian Electricity Regulatory Commission.
Achife decried the frequent harassment, kidnapping and killing of officials of the distribution company in the course of their duties and pleaded with the National Assembly to come up with a legislation criminalizing attacks of officials of the company.
He also lamented the public utter disregard for PHEDC rights of way by erecting structures under the high tension cables and its tantamount effect to loss of lives in the case of eventualities.
“Communities under us are rejecting meters, typical example of such communities are Oroazi community and Afam community.
“We have taken up the matter with the Nigerian Electricity Regulatory Commission, these communities believe that electricity is free.”
Achife said the company has concluded plans to roll out 100,000 meters for its customers in Akwa Ibom, Bayelsa, Cross River and Rivers States.