on: October 15, 2017In: Community Development, featured 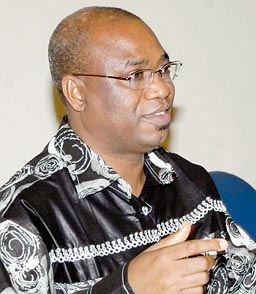 Mkpoikana Udoma 15 October 2017, Sweetcrude, Port Harcourt – President Muhammadu Buhari has been charged to step up action in the implementation of the United Nations Environment Program’s clean up report of oil polluted sites in Ogoniland.

Former Chairman of Nigeria Extractive Industries Transparency Initiative, NEITI, National Stakeholders Working Group, Mr. Ledum Mitee, who gave the charge, accused the federal government of not been sincere with the clean up, adding that only a Presidential directive is required for the clean up to commenced.
Mitee  who is an Environmentalist and Human Right Activist, in an exclusive interview with our correspondent in Port Harcourt, said more than one year after the flag-off of the clean up by Vice President, Yemi Osinbajo, nothing has been done apart from incessant media hype.
He explained that federal government have the primary responsibility to drive the whole clean up process, while the IOCs have the secondary responsibility of providing counterpart funding for the clean up.
“As far as I am concerned, the UNEP clean up of Ogoniland is on the pages of newspapers and television screens, there is hardly anything on ground to say any action is on ground, which is very sad because if you look at what UNEP said in the report, it is an emergency situation that has cost people’s lives and is costing people lives and something should be done about it.
“But more than one year after the Vice President launched the clean up in Bodo, nothing has happened; the whole thing was just a sham and it’s a shame that we have played this level of deceit on the people.
“As far as I am concerned, if the high office of the President represented by the Vice President come to a place to flag off an action, a flag off means you have actually commenced something, but more than one year nothing has happened, except that launching ceremony.
“What other evidence do you need to say the whole thing is not real? The buck stops on the President’s deck and it is that presidential directive that is required.
“My advice is that the government should get real, they should not think that Ogoni clean up is something that should be accomplished on the pages of newspapers and Television screens because lives have been lost and lives are being lost.”
Mitee who is the immediate past President of the Movement for the Survival of Ogoni People, MOSOP, and  legal practitioner by profession, also disclosed that the initial $1billion recommended by UNEP for the clean up to take off was yet to be released by the federal government.
He wondered why the same political will used in the reconstruction of the North East cannot be used in the Ogoni clean up, adding that it is injustice to treat people unequally.
“Even the money that was approved the initial $10millon has not yet even been release to the office here (HYPREP) what we see is  is his his real with him do on on a Muslim people are holding meetings everyday in Transcorp Hiltton and no money has been released, we heard it is domiciled in the ministry of environment, yet nothing is happening.
“Yet, when you look at it, the UNEP report said an initial $1billion was supposed to be the starting point for the clean up but what I am hearing now is that only $10million has been approved. $10million for a people that have been devastated for years.
“And  just last week the news broke that NAPIMS has directed IOCs to remit $100million each for the reconstruction and building of accommodation for displaced people in the North East.
“If you put that in context, then you will know that there is no seriousness in the issue of UNEP implementation when it comes to Ogoni area and by extension, the Niger Delta region, because the Ogoni clean up was supposed to set the pace for the clean up of the entire Niger Delta region.”