‘13% oil derivation not trickling down to host communities’ 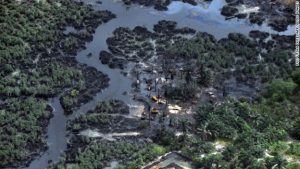 Port Harcourt — The 13percent oil derivation paid to state governments of oil producing states by the federal government, does not trickle down to the oil and gas host communities, bearing the brunt of oil and gas exploration activities, a stakeholder has said.

To this end, host communities will continue to carryout protests against oil firms, because the local, state and Federal Governments have abandoned the oil and gas producing communities, despite sourcing their major revenue from crude oil.

Speaking, a stakeholder and environmental rights campaigner, Mr. Morris Alagoa said the those receiving the 13 percent oil derivation on behalf of the host communities, are culpable in alienating the communities.

Alagoa who is the Project Officer and Head Niger Delta Resource Centre, ERA, said there should be community budgeting where stakeholders can incorporate their priority needs into states and local governments budgets.

He recalled the protest carried out in Biseni clan in Yenagoa LGA some time ago, where the clan plays hosts to several oil wells and facilities operated by Shell and Agip but lacks basic amenities and infrastructural development.

“Government presence is a far cry in most oil producing clans and communities.

“Our State Government will do better if the concept of community budgeting is enlivened, involving communities as critical stakeholders and incorporating their priority needs into state and local government annual budgets.

“A scenario whereby communities see no government project even in four years is unacceptable. Building of things like Headmasters quarters in communities is not a priority need, though needful in the education section.

Alagoa further explained that pointing at the federal government was not enough, but the state and local government should be held accountable for the lack of development of oil producing communities.

“Let us tell ourselves the truth, pointing at the Federal Government and leaving our local and state governments out of the equation tantamount not only to a disservice to our people, but it reeks of hypocrisy.

“One doesn’t have to come from any of these communities before recognizing their plight and the great social injustice they suffer from our own politicians; fellow Ijaws, not Igbo, Hausa folks or Yoruba.”