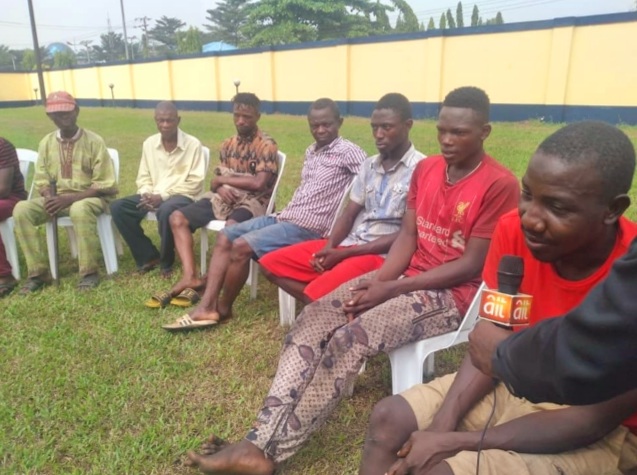 *Some of the suspects paraded by the police

Mkpoikana Udoma
Port Harcourt — The Rivers State Police Command has arrested and paraded 18 suspects for illegal crude oil refining in the state.
Parading the suspects in Port Harcourt, the Commissioner of Police, Mr Friday Eboka, said the Police was out to deal with criminals who have contributed to the issue of black soot in the state, decrying the negative health implications of the soot.
Eboka explained that following the order by Governor Nyesom Wike, the Command swung into action and set up a taskforce committee to fish out all suspected oil thieves and illegal oil refiners.
The Commissioner said the suspects were arrested at different locations in the state, noting that five suspects were arrested from one particular family in Mgbu-Atafa village in Emohua Local Government Area of the state.
He advised residents of the state to stay away from illegal refining of crude oil as the command will leave no stone unturned in fishing out more perpetrators and dealing with them accordingly.
“The Command will continue to work with government, communities and general public to bring justice to all those contributing to the undesirable problem in the state.
“Individual, families  and communities in Rivers state are hereby warned to desist from cooperating with persons engaged in such illegal activities, because anyone found to be complicit in such activities will be duly arrested and prosecuted in accordance with the law.”
The Rivers Police boss also disclosed that operatives of the Command also impounded two tankers and two trucks used for illegal storage and transportation of crude oil.
He revealed that the suspects will be charged to court immediately investigations are over.