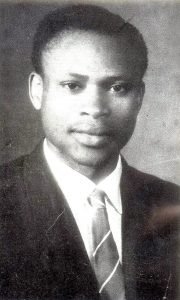 09 May 2018, Sweetcrude, Port Harcourt – A group known as the Niger Delta Self Determination Movement, NDSDM, has expressed dissatisfaction over federal government’s inability to meet up the needs of the Niger Delta region, which is the mainstay of the country’s economy.

The Bayelsa State coordinator of the group, Mr. Oki Tony, in his 2018 message on the remembrance of Ijaw Activist, Isaac Adaka Boro, lamented the inability of the Nigerian state to reflect the tenets of true federalism.

Tony, who is also the Secretary, Action Committee of Ijaw Youth Council, IYC, Worldwide, described the late activist as a brave man who was passionate to end the oppression and subjugation of Ijaw people.
He said the late Isaac Jasper Adaka Boro remained a symbol of the Ijaw struggle, whose agitation and activism for a better life for his people can never be forgotten.
In view of the 2018 Boro remembrance, Tony advised Ijaw Youths to be focused and be of good conduct in celebrating the late hero and avoid any form of disunity among themselves.