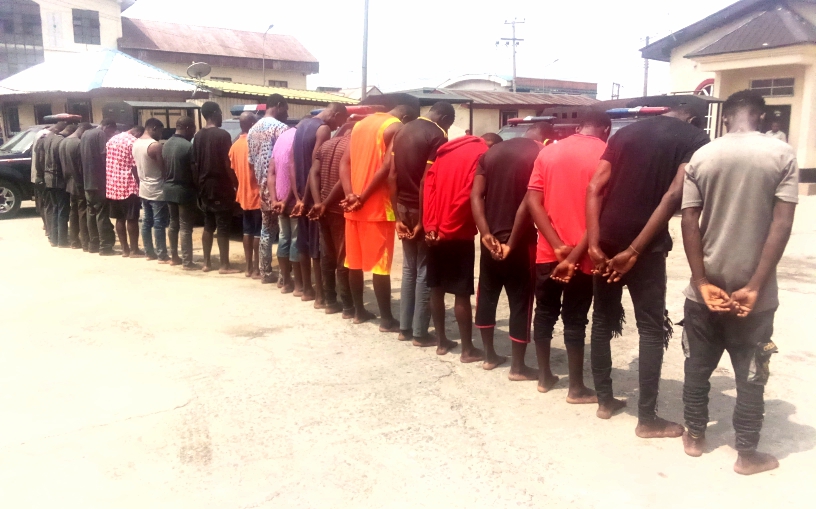 He said the 28 arrested suspects are currently undergoing investigation and would be changed to court for possible prosecution.

“As a result of the strong synergy between the Nigerian Army and the NSCDC, On 25th January, 2021 a suspect involved in oil wellhead theft belonging to Agip Oil Company, NAOC, was arrested in Chokocho community, Etche LGA and handed over to the Command for possible prosecution.

“Also, On 30th January, 2021, two suspects were also arrested and handed over to the command by the Nigeria Army for further investigation and prosecution. The suspects were arrested in connection to illegal dealings in petroleum products in Omoku, Onelga LGA of Rivers state.

“Items recovered from the suspects include two saw blades, two measuring tapes and one cylinder fane torch. The arrested suspects have since been charged to court for possible prosecution.

“On 6th February, 2021 at about 1330hrs, the Anti Vandal team of the Command arrested one suspect for willfully tampering and removing metals used in construction of bridges at Ogba/Egbema Ndoni LGA, Rivers State.

“Recovered from the suspect is a long lorry truck with registration number NSR 462 ZB, used for conveying the exhibits.

“On 18th February, 2021 at about 0840hrs, the Command arrested four suspects alleged for illegal dealings in petroleum products at Rumuokoro Axis in Obio/Akpo LGA of the state.

“The products were contained in a DAF Truck with Registration number KMC 165 VT.

“On 23rd February, 2021, at about 0044hrs, the Anti Vandal patrol team of the command arrested a Truck with registration number NCA 927 XA, loaded with unspecified liters of suspected stolen Crude Oil along Ebocha, road in Onelga LGA of the state.

“On 25th February, 2021 at about 0245hrs, 10 Suspected oil thieves were arrested with suspected adulterated AGO loaded in a truck with registration LND504 XT at Ozuboko in Port Harcourt City LGA.

“At about 0500hrs same day, (25th February 2021) the Anti Vandal team of the command arrested 6 more suspected oil thieves and a Truck with registration number SML 516 XA filled with suspected adulterated AGO at Choba, in Obio/Akpo L.G.A of the state.”

The NSCDC in Rivers State also disclosed that it has recovered vandalized rail track slippers along Komkomn rail line in Oyigbo, Rivers State, assuring that the Command has put in measures to stamp out vandalism of rail tracks in the State.

“It is quite disheartening to note that despite the laudable efforts of the Federal government to put the rail system of transportation in place and use for economic growth, some miscreants and undesirable individuals choose to make themselves stumbling blocks to the progress of the country.”