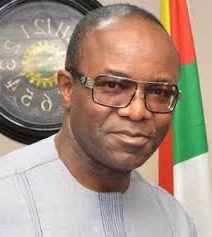 31 July 2017, Lagos – The Minister of State for Petroleum Resources, Dr Ibe Kachikwu, on Monday, lamented the loss of $300bn in oil investments globally in three years, due to the decline in oil price.

Kachikwu, who stated this at the 2017 Society of Petroleum Engineers’ Nigeria Annual International Conference & Exhibition in Lagos, said the losses were in oil exploration and production.

The theme of the conference is: “Building the Waves of Boom and Burst: Common Objectives Diverse Perspective’’.

The minister said on the Nigerian side, the loss of these investments was due to inefficiency in the country’s security policy and inconsistency in policies.

According to Kachikwu, investors prefer to invest the limited resources elsewhere in African countries; so what we are losing, other countries in Africa are gaining.

“The situation is very challenging when it comes to losing opportunities arising from investment.

“For the first time in the oil sector, the decline in the oil price resulted into loss of jobs.

“Infrastructural gap is another factor which the decline in the price created.

“We have an infrastructural gap deficit of $5bn because government was responsible for infrastructure and we did not engage the private sector.

“The whole idea of the new petroleum policy is to move the private sector into financing part of the projects because Government cannot do it alone,’’ he said.

The minister said the boom and bust had become the way of life in the oil and gas sector.

“I think we have had about five circles of boom and bust over the last 35 years and each time, we begin as if we did not expect it.

“The boom and bust has become the nature of oil and we should not be surprised anymore.

“Over 80 per cent decline in world oil price was recorded between 2014 and 2016 with oil price falling between 25 dollars per barrel.

“All the same, we have managed through the principles of OPEC, to keep the price going between 45 and 50 dollars per barrel.

Kachikwu, however, said some countries and people were moving away from oil.

He said that electric motors were taking over globally.

“In the next 20 to 25 years, oil lifespan will expire, so we just need only five years to make a change of policy in the sector.

“We must make a traumatic decision for the oil sector to survive the innovation.

“The country needs a consistent policy and to deal with inefficiencies in our system to survive the trend,’’ he said.

Welcoming the participants, Mr Saka Matemilola, the Chairman, SPE Nigeria Council, said the mission of the conference was to disseminate information as regards the oil and gas sector.

He said the current challenges in the oil sector provided the necessary catalysts to provide opportunities for the country.