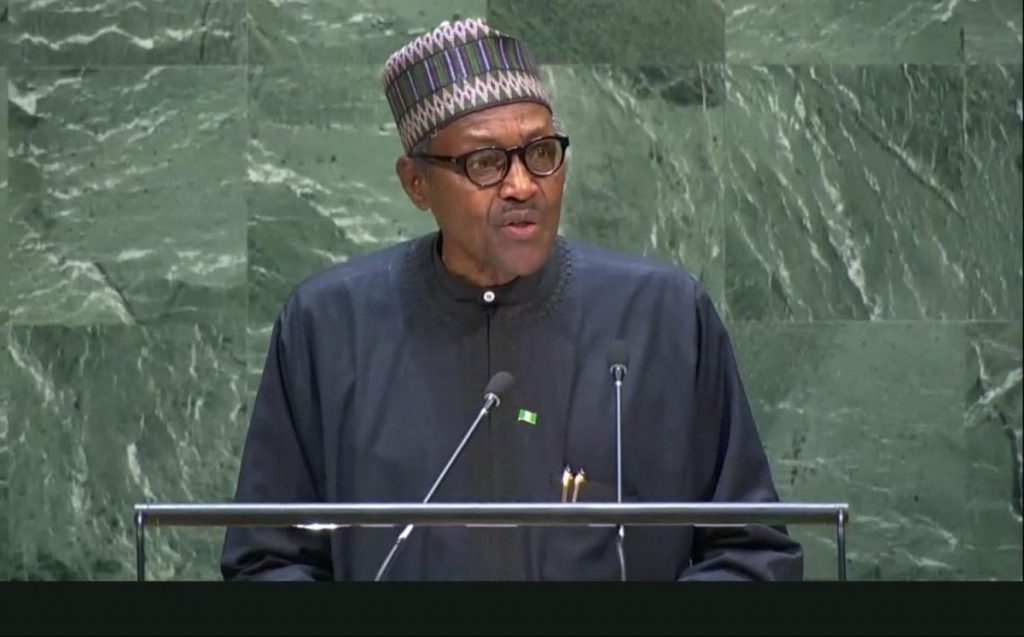 Lagos — President Mohammadu Buhari has said he would be needing the sum of $400 billion (N164.7 trillion) to fund Nigeria’s critical energy needs. This fund, he said, exceeds the sector’s budget for the next 30 years, according to a report by Bloomberg.

President Buhari made the statement as he addressed the United Nations General Assembly on Thursday. He is under pressure to show how Nigeria would ultimately transition away from fossil fuels.

The sum of $300bn would be needed for electricity generation, transmission and distribution infrastructure while $116bn would be for buildings, industry and transport facilities.

The President did not include a timeframe for the spending plan but he said the country would need support from developed nations to bridge the funding gap, as Nigeria would not be able to raise the full capital.

“The government plans to provide electricity to five million households and 20 million people using solar energy solutions, as a first step toward closing Nigeria’s energy access deficit by 2030,” part of his statement at the UN meeting read.

The Federal Government had budgeted to inject N198.27billion on various capital projects in the power sector across Nigeria in 2021.

Breakdown showed that while the National rural electrification managed by the Rural Electrification Agency, will invest a total of N17.86billion on power infrastructure development in rural communities, the Nigerian Electricity Regulatory Commission plans to invest N294.1million on capital projects, while capital projects to be handled by the Nigerian Electricity Management Services Agency will gulp N441.1million. The allocation for capital projects to be handled by the Transmission Company of Nigeria, as contained in the proposed budget, is N4.69billion. Capital outlay projected for 2021 by the Nigeria Electricity Liability Management Limited is N914.87million, while the National Power Training Institute targets to invest N294.1million. Total overhead for the entire ministry and its agencies was put at N1.16 billion, and budgeted for personnel in the power ministry and its agencies is N4.9billion.

Findings showed that FG reportedly spent over N240 billion in the last five years, paying some power plants for electricity they neither generated nor put into the grid for use.

The monthly payments are based on the “take or pay” clause in the Power Purchase Agreement between FG and the affected power generation companies on the understanding that since electricity cannot be stored, whatever was generated must be utilised and paid for.

However, findings showed that five of such power plants have not been operating on the excuse of lack of gas to the plants and, therefore, generating nothing but are being paid on a regular basis.

To end current electricity subsidies by December 2021, FG, also, had budgeted to spend $3 billion on the energy sector in the next 24 months. The spending was expected to increase the power being wheeled by the Transmission Company of Nigeria, TCN from the current 4,900MW to at least 7,000MW.

Despite the budget, and the year already far spent, TCN’s infrastructure has been unable to wheel up to 4,900MW at a stretch, not to talk of 7000MW, as the country gets regularly overwhelmed with reports on grid collapses. Atleast four incidents have occurred this year due to lack of spinning reserve.

Findings showed that the five power stations meant to provide spinning reserves had not been doing this for years.

If he is able to rally the UN Assembly and external bodies to raise the proposed $400 billion (N164.7 trillion) for the sector, experts are of the opinion that such fund might not only pose a huge risk on the country’s already overwhelming debt burden, but could also go down the drain in a sector already touted to be a draining basket.