50% of trucks in Apapa belong to Dangote, Flour Mills – STOAN 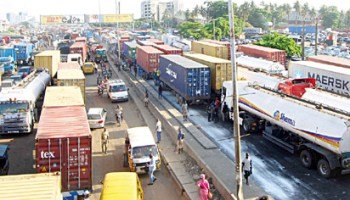 29 July 2018, Sweetcrude, Lagos — Checks have revealed that more than half of the trucks in Apapa are those owned by the Dangote Group and Flour Mills Nigeria PLC.

Spokesman of the Seaport Terminal Operators Association of Nigeria (STOAN), Mr. Bolaji Akinola, who disclosed this in Lagos on Wednesday, said the two organisations use trucks to evacuate their products from their factories located in Apapa.

According to him, “Little attention has been paid to the volume of trucks that call at Dangote Sugar factory and Flour Mills Nigeria. Both factories are located inside the Lagos Port Complex, Apapa. Their operation has nothing to do with the port. They’re strictly production concerns. Dangote Sugar has an annual production capacity of 600,000 tonnes of refined sugar, which it produces mostly for the Nigerian market while Flour Mills has an annual capacity in excess of one million tonnes.

“Everyday, no fewer than 300 Dangote trucks are required to move its sugar from the Dangote Sugar factory while about 400 trucks are needed by Flour Mills every day to move its products to the market.”

Akinola said in addition to the two companies, Honeywell Flour Mills, and BUA Sugar Refinery, both located within the Tin Can Island Port Complex, also attract a large number of trucks to Apapa and its environs.

“The point that stands out here is that collectively, these manufacturing concerns located within Apapa attract close to one thousand trucks daily,” he said.

Akinola said if government compels the manufacturing concerns to evacuate their products from Apapa by barges, the Apapa gridlock “will ease considerably”.

“Apart from these manufacturing concerns, the preponderance of tank farms in Apapa is also a huge attraction for trucks.

“Everyday, more than 3,000 tankers are required to lift petroleum products from the numerous tank farms in Apapa. How about suspending the operations of these tank farms until they’re able to move products out of Apapa by rail and barges?”

The STOAN spokesman said the multi-security task force, Operation Restore Sanity in Lagos, set up by the Federal and Lagos State Governments to address the Apapa gridlock will not be able to achieve its mandate until certain fundamental issues that gave rise to the gridlock are addressed.

He said, “The problem is that the road network leading to and out of Apapa have packed up. Also, there are no parking lots for this large number of trucks descending on Apapa. The gridlock you see and its spillover effects all over the Lagos metropolis will persist until these core issues are addressed.”

Akinola also called on the government to de-emphasize the use of roads for the haulage of heavy cargoes.