– APAC energy generation to rise 3.9% every year between 2022 and 2030
– APAC region has significant potential when it comes to renewable energy, but high energy demands traditionally lead to greater reliance on coal
– Worldwide energy generation to reach 35PWh by 2030, with 49% generated from renewable or low carbon sources
– APAC region expected to obtain a lower share of its energy from renewable energy than Europe and North America, but still an impressive 43%

Lagos — With the Asia-Pacific (APAC) region expected to generate over half of the world’s energy by 2030, leading data and analytics company GlobalData notes that energy decisions made by the leaders of APAC countries in the next few years will have significant impacts on the battle against climate change.

As economies grow, so will consumption. Such growth is often reliant on increasing the use of fossil fuels. GlobalData’s latest report, ‘Tech in 2030 – Thematic Intelligence’, reveals that the APAC region is expected to experience the highest growth in energy production—with generation rising 3.9% every year between 2022 and 2030, compared to the 1.8% in Europe and 1.4% in North America. This casts concerns about whether renewable development will be able to keep pace. 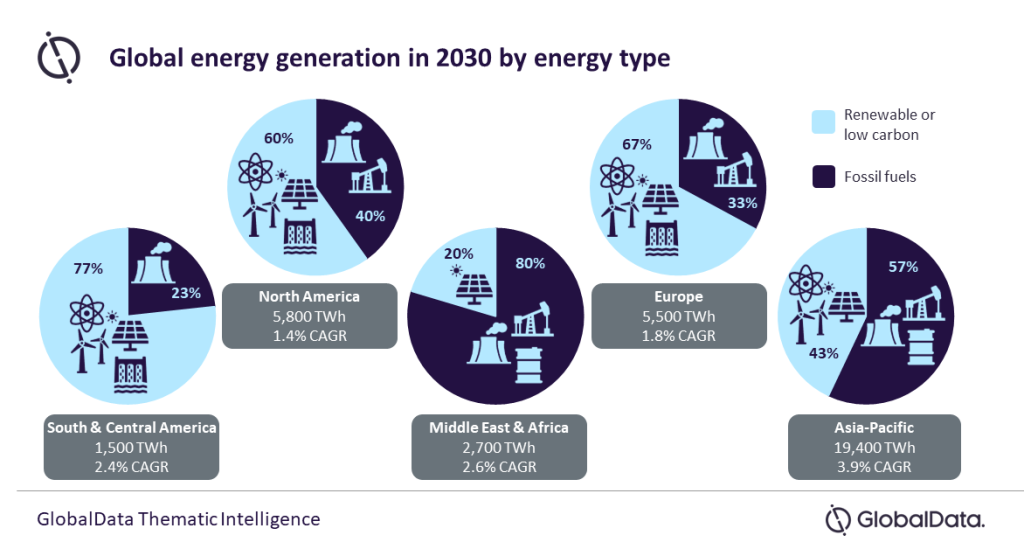 Robert Penman, Thematic Analyst at GlobalData, comments: “Traditionally, growth has been reliant on increasing fossil fuel use, which is at odds with the burning need to decarbonize and limit the effects of climate change. Further, climate change will increase energy demand and consumption even further. For example, air conditioning systems will be increasingly necessary around the world. The APAC region has some incredible potential for renewable development, but it is clear that the decisions made by leaders in this region between now and 2030 will be felt all around the world.”

The APAC region is expected to generate 43% of its energy from renewable sources by 2030, driven by investment in China and Australia, as well as the high potential in Mongolia.

Penman continues: “China is a clear winner when it comes to renewables in the APAC region. It has invested heavily in both solar and wind, and its highly productive companies will export these technologies and the necessary infrastructure worldwide. Meanwhile, Australia will benefit greatly from the energy transition as it has access to key raw materials and enormous solar power potential—useful for hydrogen production. Last, but not least, Mongolia has the potential for 2.6 terawatts of renewable energy production. Major advances in battery storage would allow significant energy exports from this country.”

Worldwide energy generation will reach 35PWh by 2030, with 49% of energy generated by renewables and low-carbon fuels. Most of the world’s regions are looking to generate more energy from renewables than fossil fuels (67% from renewables in Europe, 60% in North America, and an impressive 77% in the South and Central America), but APAC and MEA will lag behind, at 43% for APAC and 20% for MEA.

Penman adds: “APAC and MEA’s lower renewable generation share is a consequence of the need to rapidly increase energy generation to keep pace with the regions’ growing consumption. Microgrids offer a way to start incorporating renewables into the power mix while also helping rural populations access electricity. They are often fuelled by off-grid renewable sources to power local buildings and can later be connected to the main grid to increase its resilience and provide backup support.

“Conversely, Europe’s higher proportion of energy from renewables will heighten the need for a continent-spanning supergrid and large-scale energy storage solutions. This will enable countries to match renewable power generation and demand across the entire continent.”

GlobalData’s report reveals that, despite an estimated $4.4 trillion of investment in renewable energy projects between 2022 and 2030, coal will remain the single largest source of energy worldwide in 2030—accounting for 9.5PWh of generation. Wind and solar will see the most development, with generation growing at a yearly rate of 9.3% for wind, and 14.9% for solar.

Penman continues: “As the world weans itself off fossil fuels, it’s easy to know which renewable technologies will have the greatest impact on limiting climate impact by 2030 – it will be the technologies implemented today. Wind and solar in particular will grow in importance over the next decade and beyond.”