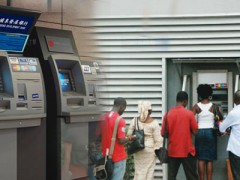 25 March 2013, Lagos – NOI Polls has revealed that majority of customers of banks in Nigeria complain of hidden charges on them for banking services.

Latest weekly poll results released by NOI Polls revealed that the majority of banking Nigerians (61 percent) agreed that Nigerian banks are exploiting their customers through hidden bank charges. In addition, First Bank was judged to have the best customer service delivery closely followed by GT Bank. These were the two key findings from the Bank Customer Service Snap poll done in the week of March 11th 2013.

NOI Poll also explained that it under took the study following conversations among the banking public on poor service delivery and unexplained charges by banks on transactions.

It is against this backdrop that NOI Polls sought the opinions of banking customers on customer relations and service delivery of Nigerian Banks over the last quarter.

“It is our hope that the results from this poll will guide banking executives and relevant Corporate/Customer service champions to re orientate the industry on quality service delivery and sustained customer relationship, after all  the ‘customer is king” NOI Poll declared.The NOI Polls survey asked respondents five specific questions.

Overall, by a slim margin the majority (29 percent) stated that First Bank has the best customer service followed by GT Bank with 26 percent. These two banks were perceived to be the best banks by a considerable distance. They were followed by Zenith Bank (nine percent), UBA (eight percent), Ecobank (seven percent) and Access Bank (six percent).

Respondents were subsequently asked: Why do you think the bank mentioned has the best customer service? Overall, the majority of respondents (35 percent) chose the Bank mentioned because the “Staff are friendly and helpful”. This is followed by 22 percent with the explanation that “Staff are knowledgeable and efficient” and 13 percent each mentioned “Staff are good at settling complaints” and “Staff are patient with customers”.
*Peter Egwuatu