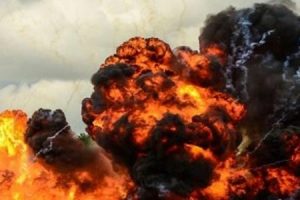 Port Harcourt – Obotim Nsit, a sleepy and quiet community  in Nsit Ibom Local Government Area of Akwa Ibom State, has not been the same after an explosion from a gas pipeline operated by the Nigerian National Petroleum Corporation, rocked the community in 2016.
Five years after the incident, the community is demanding N7.6 billion compensation from the state oil company.
The community plays host to one of the numerous gas pipelines operated by the NNPC, which run through the community from Ukanafun to Calabar, Cross River State, supplying gas to the Aluminium Smelter Company of Nigeria, ALSCON, in Ikot Abasi.
On July 27, 2016 at about 11:30am at the community’s school, Asang Community High School, an NNPC pipeline exploded and caught fire, killing about 28 people and destroying the school, nearby buildings, and causing severe air pollution, while rendering the land unproductive.
The cause of the explosion was not immediately known, but Spokesperson of the Niger Delta Avengers, Murdoch Agbinibo, had claimed responsibility for the attack on the pipeline, although then Commissioner of Police in the state, Murtala Mani, denied any militant attack on the gas pipeline, while attributing the explosion to a technical fault.
“This is no militancy attack. Our men are on ground and the fire service had put off the fire.
“People from the pipeline confirmed that the pipelines are old and overdue for servicing. There are technical problems in the gas pipeline,’’ the Police Commissioner had said.
Five years after the gas explosion, the effects of the incident is still being felt in the community as rain water is always dark and unfit for consumption as a result of the gas emissions in the air.
Narrating the predicament of the community, the village head of Obotim Nsit, Eteidung Iniobong Akpan, said effects of the NNPC gas pipeline explosion that occurred in 2016 in the community is still killing people and destroying economic trees and livelihoods of the people.
Akpan lamented that his people are still suffering from heart attacks, while houses are still collapsing as a result of the incident.
He regretted that the secondary school affected by the explosion has not be rebuilt five years after the incident.
“Since the gas pipeline explosion, we have been having one effect after the other, damage after damages. Many houses have collapsed. Water from rains is always black and unfit for consumption as a result of the gas emissions, which is still in the air.
“Most of our people are suffering from heart attacks. The roof of Asang Community High School where the incident occurred have been ripped open and since then, no conscious effort has been taken to renovate the school.
“Recently, students writing WASSCE in the school had had to stop writing exams to allow the rain to stop because of the leaking roofs.
“There is no electricity in our community since then because the servicing company (Seven Energy) ordered that the transformer be disabled to enable the fire that erupted from the explosion to be put out.
“We can’t even breathe good air because the atmosphere of our community is still polluted. This has led to serious health challenges for the people,” he lamented.
The community leader is demanding for the sum of N7.6 billion from NNPC as compensation for the devastation and destruction from the explosion in the area.
He said the money would enable the clean up of the mess, while calling on the Federal and state governments to come to the aid of the community.
“We are also urging the Akwa Ibom and Federal governments to intervene, so that we can have our lives back,” he said.