Acting Libya oil minister to be replaced by NOC chairman 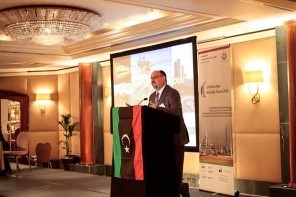 Shakmak, a technocrat, told Reuters Prime Minister Abdullah al-Thinni had informed him he would be replaced. “I will abide by the decision because it is not a matter of job but it is Libya. We can serve Libya in different jobs,” he told Reuters by phone.

NOC spokesman Mohammed El Hariri said Sanallah had been told he would take over Shakmak’s job as deputy oil minister while remaining at the helm of the state firm. Since there has been no oil minister for months Sanallah will effectively become acting oil minister.

The change at the top comes at a time when Libya’s oil production has made a comeback after a year of protests and blockages at major fields and ports.

Output has risen to 562,000 barrels per day (bpd), NOC said on Tuesday, well above lows of barely 100,000 bpd seen a few months ago but still well short of previous production levels of about 1.4 million bpd.

“The production of the Libyan crude oil has begun to recover gradually and is expected to return to its previous status as it was at the end of the year, if the situation stabilises in the different oil regions,” Shakmak said.

But he said Libya was facing difficulties to return to markets after losing customers due to protests by various armed groups. They helped topple Muammar Gaddafi in 2011 but now use their guns to make political demands.

In a rare success for the government, a tanker started loading oil at top port Es Sider for the first time since the end of a year-long blockade by a group seeking autonomy in the east of Libya, NOC said.
*Ulf Laessing & David Clarke – Reuters