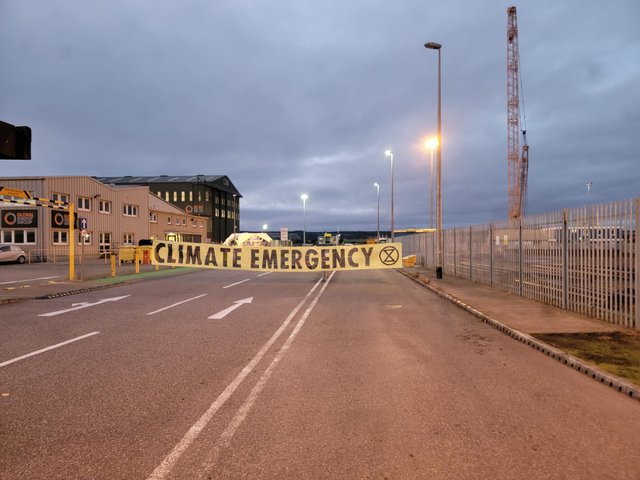 On Wednesday morning, activists from Extinction Rebellion Scotland started blockading the main entrance of an oil rig maintenance facility at the Invergordon Service Base of the Cromarty Firth Port Authority by erecting a large 14-feet tall prop oil rig made of scrap materials with a banner saying, “Please Decommission Me”.

In addition to the prop, four activists were locked onto prop oil barrels in the road, preventing traffic access to the facility. Other activists nearby were holding banners with “Climate Emergency” and “No Future in Fossil Fuels” messages on them.

“The Chatham House report says that even if the Paris Agreement carbon emissions were achieved, we have almost no chance of staying below pre-industrial levels of warming. We have to act now. Our carbon budget is empty. We have no option,” XR Scotland activist and retired history teacher John Lardner said.

The group is calling for an end of fossil fuel extraction and support for a transition of skilled oil and gas workers into decommissioning and renewable industries, not new oil fields.

According to Extinction Rebellion, 660,000 jobs are at risk as the UK falls behind in green infrastructure and jobs, but the North Sea oil and gas industry is expecting a flurry of new contracts.

“Places like this must look into the future, to survive they need to transform into doing work that doesn’t compromise our future instead of trying to continue making a profit […],” XR Scotland activist and engineering student Maciej Walczuk added.

The activists reminded that despite their protests, the Oil and Gas Authority (OGA) is continuing with plans to explore new oil at Cambo near Shetland.