Africa a net creditor to the rest of the world – Report 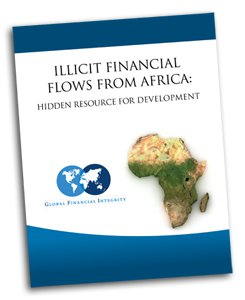 29 May 2013, Marrakech, Morocco/Washington, DC – A new joint report by the African Development Bank, AfDB, and Global Financial Integrity, GFI, launched Wednesday at the 48th AfDB Annual Meetings in Marrakech, Morocco, reveals that the African continent has been a long-term net creditor to the rest of the world.

The report finds that Africa suffered between US$597 billion and US$1.4 trillion in net outflows between 1980 and 2009 after adjusting net recorded transfers for illicit financial outflows.

“The traditional thinking has always been that the West is pouring money into Africa through foreign aid and other private sector flows, without receiving much in return. Our report turns that logic upside down – Africa has been a net creditor to the rest of the world for decades,” said Raymond Baker, President of GFI, a Washington-based research and advocacy organization.

Prepared by a joint team consisting of GFI Chief Economist Dev Kar, GFI Economist Sarah Freitas, AfDB Senior Economist Jennifer Mbabazi Moyo, and AfDB Economist Guirane Samba Ndiaye, the study finds that cumulative illicit financial outflows from the African continent over the 30-year time span ranged from between US$1.2 trillion to US$1.3 trillion in real terms. These unrecorded illicit outflows considerably swamped cumulative net recorded flows over the same period. As such, cumulative net resource outflows from Africa ranged from US$597 billion to US$1.4 trillion between 1980 and 2009.

Titled “Illicit Financial Flows and the Problem of Net Resource Transfers from Africa: 1980-2009,” the report does not consider the drivers behind the illicit financial outflows, noting that country-specific case-studies would have to be performed to determine the underlying causes, which likely vary between African nations. Also, much of the proceeds of drug trafficking, human smuggling, and other criminal activities—which are often settled in cash—are not included in this work.

However, the AfDB and GFI note that such significant transfers of capital out of the continent are likely to have a negative effect on economic development.

“The African continent is resource-rich. With good resource husbandry, Africa could be in a position to finance much of its own development,” said AfDB’s Ncube.

“More than one trillion dollars flowed illicitly out of Africa over the past 30 years, dwarfing capital inflows, and stifling economic development,” noted GFI Chief Economist Dev Kar, who previously served as a senior economist at the IMF. “Curtailing these outflows should be paramount to policymakers in Africa and in the West because they drive and are, in turn, driven by a poor business climate and poor overall governance, both of which hamper economic growth. The slower growth rate results in more aid dependency with foreign taxpayer funds filling the shortfall in domestic revenue—to the extent that tax evasion is a part of illicit flows.”

“The time for concerted action is now, with clear roles for national and international actors. African countries need to accord policies to stem these flows the same urgency as other priority policy measures. Countries should go beyond the Extractive Industries Transparency Initiative to ensure transparency along the entire resource value chain, as well as establish well-functioning Sovereign Wealth Funds,” said Issa Faye, Manager in the African Development Bank’s Research Department.

“For every country losing money illicitly, there is another country absorbing it. These outflows are facilitated by financial opacity in advanced Western economies and offshore tax havens. Implementing transparency measures to curtail tax haven secrecy and anonymous shell companies is crucial to curtailing illicit flows,” added GFI’s Baker.

Measures recommended to boost net resource transfers into Africa and curtail illicit financial flows from the continent include, among other things:
•Requiring banks and tax havens to regularly report to the Bank for International Settlements (BIS) detailed deposit data by sector, maturity, and country of residence of deposit holders. The BIS must be permitted to widely disseminate this cross-border banking data for specific source and destination countries, ideally making the data publicly available on its website or, at the very least, to civil society and researchers.
•Addressing the problems posed by anonymous shell companies, foundations, and trusts by requiring confirmation of beneficial ownership in all banking and securities accounts, and demanding that information on the true, human owners of all corporations, trusts, and foundations be disclosed upon formation and be available in public registries;
•Ensuring that the anti-money laundering regulations already on the books are strongly enforced;
•Requiring the country-by-country reporting of sales, profits, employee levels, and taxes paid by all multinational corporations;
•Pursuing the automatic cross-border exchange of tax information on personal and business accounts—ideally on a multilateral basis as a number of European nations have announced they will begin doing;
•Addressing capacity issues and corruption domestically within African tax authorities;
•Reforming customs departments to better detect and deter trade misinvoicing;
•Encouraging resource-rich countries to establish well-functioning Sovereign Wealth Funds (SWFs), while joining the Open Budget Initiative, the Collaborative Africa Budget Reform Initiative (CABRI), and the Extractive Industries Transparency Initiative (EITI);
•Empowering national authorities for the regulation and management of public procurement; and
•Implementing policy measures to boost net recorded transfers by improving the business climate.