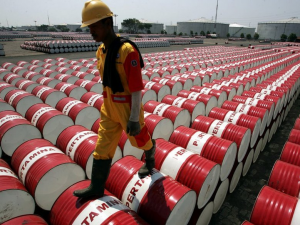 27 June 2018, Sweetcrude, Lagos — The first half of 2018 is almost over, and statistics have shown that Africa is yet to order a single barrel of crude oil from the United States.

Data sourced from the U.S Energy Information Agency, EIA, the group in charge of the country’s extractive and renewable energy data, showed that other continents such as Asia and Oceania, Central and Southern America, Europe, Middle East and North America, have been latching on oil from the U.S. since 2013.

U.S. petroleum exports have increased rapidly in recent years and have become an important factor in global oil markets.

Order for the country’s crude by Africa rose to 20,000 barrels per day in 2017, but, nothing has been ordered by the region so far this year.

Canada was the largest destination for U.S. crude oil exports in 2017.

U.S petroleum products exports have also increased over the past several years, reaching 5.2 million b/d in 2017.

The country is currently slugging it out with OPEC, gunning to be the world’s highest crude oil producer and exporter.

In this quest, the U.S intentionally flooded the global oil market with its cheaper shale oil, causing a crash in oil prices to below $30 per barrel in 2015 from above $100 barrels day the previous year.

To remedy the damage, OPEC, Russia and other countries formed a pact, agreeing to cut production by 1.8 million barrels per day to boost prices as most of its member countries were oil-dependent economies.

As a result of the OPEC and non-OPEC nations’ Declaration of Cooperation, DoC, entered into late 2016, oil prices have since shot up to $80 per barrel since early this year.

The DoC attained a 145 percent compliance in April.

With this historical feat, US President Donald Trump had stormed the social media, Twitter, condemning OPEC and its partners for “artificially” inducing prices.

He had on April 20, tweeted “Looks like OPEC is at it again with record amounts of oil all over the place including the fully loaded ships at sea. Oil prices are artificially Very High! No good and will not be accepted!”

He also tweeted on June 13 that “Oil prices are too high, OPEC is at it again. Not good.”

Again, on June 22 as OPEC was concluding its meeting on whether to hold or increase crude oil supply, Trump tweeted, “Hope OPEC will increase output substantially. Need to keep prices down.”

President Trump was also alleged to be behind lobbying Saudi Arabia, a member of OPEC, into pushing for an increase in output by the group and its partners at the just-concluded OPEC meeting in Vienna-although he had denied being behind pressurising the Arabian country.

Now, OPEC has increased output by 1 million barrels per day, cutting the DoC from 145 percent compliance to 100 percent.

Still, it is unclear whether or not Africa might in the second half of the year, decide to swing towards the U.S shale oil.