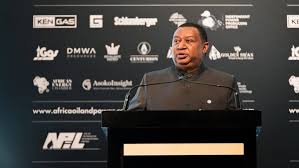 Lagos — In terms of oil, Africa has around 130 billion barrels of proven crude oil reserves, Secretary General of the Orgnaisation of Petroleum Exporting Countries, OPEC, Mohammad Barkindo has revealed.

Barkindo made the disclosure at the APPO CAPE VII Congress and Exhibition, in Malabo, Equatorial Guinea, noting that the figure is an increase of around 50% since the end of last century.

And in terms of proven natural gas reserves, the figure is over 15 trillion standard cubic metres, a number that has more than doubled since the mid-1980s.

“It is irrefutable evidence of the petroleum potential of Africa, the exciting and abundant opportunities, and the role that this industry can play in unleashing tremendous economic development and prosperity across the continent”.

According to the United Nations, more than half of the global population growth between now and 2050 is expected to occur in Africa.

Barkindo said it underscores the fact that the continent will continue to have a young and vibrant population; a wealth of human capital needed to develop the available resources, ensuring that the continent takes its leading position on the global stage.

“We need to harness what we have – in terms of resources and our people – to ensure that everyone benefits, and that no one is left behind”, he said.

Moreover, the OPEC chief said for Africa to take its place on the global space, requires collaboration, the promotion of intra-African cooperation and pan-African alliance building.

He added that the oil and gas sector needs to see a further pick-up in industry investments, particularly for long cycle projects.

“It is why we continue to take a very measured approach through the ‘Declaration of Cooperation’ – we look at the economic and market outlook, and we listen to consumers and other stakeholders”.

According to him, the ‘Declaration’ is not about short-termism.

“We are focused on continuity; we are steadfast and completely unwavering; we have long-term objectives and goals”, he said.