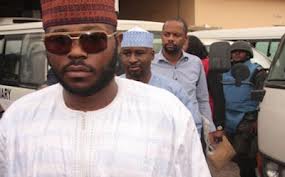 The Economic and Financial Crimes Commission, EFCC, arraigned the defendants on a 13-count amended charge before Justice Adeniyi Onigbanjo for alleged conspiracy, forgery, obtaining money under false pretence and use of false documents.

Those arraigned alongside Ali were Christian Taylor, Abdulazeez Afeez and Nasaman Oil Services.

The duo of Ali and Christian Taylor had earlier been arraigned before the court alongside Nasaman Oil Services on July 26 over alleged N2.2 billion fuel subsidy scam before amending the charge to re-arraign the defendants on N4.4 billion, Monday.

When the charge were read to them they all pleaded not guilty to the charge and the presiding Judge extended the earlier N200 million bail condition granted the defendants when they were first arraigned.

In the amended charge of 13 counts, the anti-graft agency alleged that the defendants were involved in subsidy fraud amounting to about N4.4 billion.

According to EFCC, the defendants had conspired to obtain the money from the Federal Government for the purported importation of 30.5million litres of Premium Motor Spirits or petrol.

The EFCC said their alleged offences contravened Sections 1(3) of the Advance Fee Fraud and Other Fraud Related Offences Act of 2006.

Further hearing is adjourned till February 6, 2013.