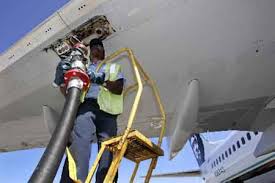 *A handler fueling an aircraft.

01 February 2019, Sweetcrude, Port Harcourt — A call has been made to stakeholders in the nation’s oil and gas sector to as a matter of urgency, consider the local production of aviation fuel, popularly called Jet A-1.

Aviation fuel is a specialized type of petroleum-based fuel used to power aircraft, which is generally of a higher quality than fuels used in machines or vehicles, and often contains additives to reduce the risk of icing or explosion due to high temperature.

Port Harcourt station manager, Max Airline, Mr. Ejike Osuji, who made the call, lamented that high cost of aviation fuel gulps over 30 percent of the operational cost of airlines in the country.

Osuji speaking to newsmen at the Port Harcourt International Airport in Omagwa, said the call is necessary as the supply of aviation fuel was sometimes epileptic, resulting to disruption of flight movements.

He also decried the high cost of aircraft maintenance, which according to him, because these costs were domesticated in dollars.

According to him, “The production of Jet A1 in Nigeria would regularize supply and bring about reduced cost which would also translate into lower airfares by airlines.”

The Airline Manager also commended the Federal Government’s plan to set up Maintenance, Repairs, and Overhaul, MRO, facility, while expressing happiness that Nigeria’s airspace has been accident-free in the last six years.

“The aviation sector in Nigeria today is safe as accidents have remained at zero levels for six consecutive years, with no serious or reportable incidents at any level. This is good news that rekindles hope in the sector.

“The MRO is part of the Federal Government’s strategic plans to reduce capital flight, lower the times’ aircraft leaves the country for repairs, and lower the cost of maintenance,” Osuji said.