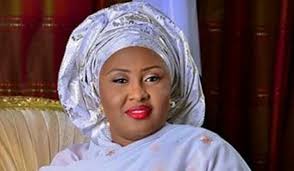 Lagos — The First Lady, Her Excellency, Mrs. Aisha Buhari will be leading other dignitaries and stakeholders in the maritime community to campaign and encourage more female participation in seafaring and maritime trade as the country joins the rest of the world to mark this year’s Day of the Seafarer on June 25.

The Director-General of the Nigerian Maritime Administration and Safety Agency, NIMASA, Dr. Dakuku Peterside, disclosed this at the weekend in Lagos during a chat with journalists, noting that her presence would further boost the ongoing campaign to encourage the participation of more females In seafaring and the maritime sector, in line with the International Maritime Organisation, IMO, campaign for this year to get more women into the hitherto male-dominated profession.

Dakuku regretted that very few females were in the profession of seafaring and said NIMASA was working with stakeholders to try to reverse “the great imbalance.” He said the presence of the President’s wife, who will be leading other prominent women in the maritime industry to the event scheduled to hold in Lagos, will be a boost to the efforts to attract more female involvement in the sector.

He noted that this year’s event, themed “On board with gender equality”, was geared towards encouraging more women to take advantage of opportunities in the maritime sector, particularly as seafarers; as Marine Engineers, Nautical Scientists, Marine Surveyors, Deck officers and even grow to become Master Mariners.

“Statistics available have shown that only 2% of the total seafarers across the world are females and more disappointing is the fact that majority of this percentage are from the Philippines a country which dominates the profession in huge numbers, raking in huge income / foreign exchange. So there is a need for us to take conscious and deliberate actions to encourage women to take a career in seafaring,” Dakuku stated.

The NIMASA DG said this year’s Day of the Seafarer was unique, as it is focused on highlighting the fact that the seafaring profession is not a career solely preserved for men but one that can accommodate all genders. He also disclosed that there would be a one-day sensitization workshop on Monday in Lagos for over 400 Nigerian female students from all over the country to showcase the benefits of taking a career in seafaring.

Speaking on what NIMASA is doing to encourage women to take a career in the profession, Dakuku stated that the Agency was planning a robust awareness programme that would continue to enlighten Nigerians on the seafaring profession. He said the Agency would also look into creating more avenues for Nigerian students through interventionist programmes and proper education.

This year’s celebration which is also co-hosted by the Managing Director, Nigerian Ports Authority Ms. Hadiza Bala Usman, the Executive Secretary Nigerian Shippers Council Barr. Hassan Bello is also expected to have in attendance the wife of The Lagos State Governor, Dr. Mrs. Ibijoke Sanwo-Olu, members of women international shipping and trading Association (WISTA), members of Women in Maritime Africa (WIMA) other notable Associations that are expected to be part of the event include the various associations of shipowners in Nigeria, Maritime Workers Union of Nigeria ((MWUN) and other key players in the sector.