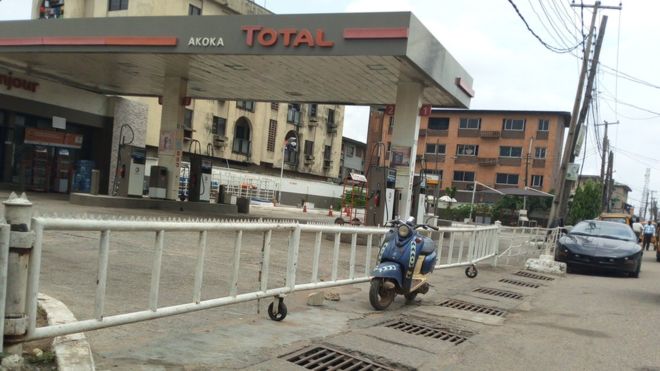 23 July 2018, Sweetcrude, Lagos — Two Lagos state government and two federal government agencies have confirmed the commencement of the remediation of land areas impacted by the spillage of 600 litres of fuel from a Total filling station in the Akoka area of the state.

The confirmation was contained in documents cited by SweetcrudeReports during a tour of the affected community on Saturday.

In a bid to find out the truth behind her concern, SweetcrudeReports made a trip to the city of Akoka on Saturday, and while at it, findings showed that the contamination had affected houses in two out of nineteen streets.

Upon noticing the huge amount of fuel leakages, the Total station we learnt, approached the residents of the affected houses, especially the Akoka Community Development Council, who then took the matter up with the management of the station as their water wells in their compounds had got polluted by the fuel.

Chairman of the Akoka CDA, Mr. Segun Adesanya told SweetcrudeReports that the community then called on the management of Total filling station to carry out remediation of the water sources which occurred as a result of the accidental leakage.

Findings from residents revealed that management of the station immediately sprang into action by first changing the station’s tanks, provided alternative water sources to the affected houses, and then inviting government agencies such as the Department of Petroleum Resources, DPR, National Oil Spill Detection and Response Agency, NOSDRA, Lagos State Environmental Protection Agency, LASEPA and to carry out inspections and lab testing of the water sources.

However, a resident, Ifeamaka Umeike, told SweetcrudeReports that the efforts of the station had not provided the needed solution to the problem, expressing dissatisfaction with the remediation.

According to her, the company claimed to have done remediation, but the area, she said, was still polluted.

“All we are saying is that the filling station should exhume and evacuate its fuel tank and replace it with new ones because the tank is still leaking,” she added.

However, the station dealer told SweetcrudeReports that the right steps were taken and they have also been fair to all since the inception of the crisis till date.

Documents seen confirmed the steps the company said it took to manage the situation, and how it liaised with relevant stakeholders, including the Akoka CDA, Lagos State Emergency Management Agency, LASEMA, LASEPA, NOSDRA, DPR and Bariga Police station in the remediation process.

They also presented the final certification reports declaring the area free and safe from pollution.

They also presented a proof stratification certificate of conformity, dated September 29, last year, which indicated that the leakage had been fixed.

The dealer of Total Service Station, Akoka, Mr. Aleem Maruf, admitted that there was indeed, fuel leakage in the station premises, but disagreed with the claim that the community was neglected.

He said: “On August 13, 2017, we discovered that there was fuel leakage in one of our underground tanks after we realised that 600 litres of petrol were missing. Immediately, we notified Total headquarters and our station at Apapa, which swung into action without delay.

“We started by disconnecting all the water sources immediately. The situation was appropriately reported to Bariga police station after which we alerted and invited all stakeholders including officials of the LASEMA, LASEPA, and DPR. They all toured the community and took samples from houses to determine affected areas as well as the extent of the damage. By the end of the investigation, it was discovered that seven houses including the station were affected.

“Having done this, an agency, Terra Aqua Environmental Consultancy Limited, commenced remediation, which started right from the station. We were advised by LASEPA to get tanks for all the affected houses and supply them water regularly for the period of the remediation. We bought Geepee tank of 2000 litres capacity for all affected houses and supplied them with government-approved water four times in a week to ensure that they don’t lack water. We also made provision for a medical check-up to be carried out at their convenience”.

“By May 2018, the affected areas were declared free from pollution, hence, it was confirmed safe to drill new boreholes. As instructed by LASEPA, we have dug four boreholes while the 5th one is due for completion.”

Reacting to Ifeamaka Umeike’s claim, Maruf denied neglecting the community, stating: “On the day the sad incident broke, the lady in question was not around, she came back two weeks after we had cleared the environment and done the needful by law. However, remediation exercise was still ongoing. She commended the station on the efforts taken so far and this is glaring in a letter she wrote to us.”

When SweetcrudeReports visited the community on Saturday, we saw the letter dated August 30, last year where she (Ifeamaka) applauded the company’s swift action, stating: “I have to applaud the fact that they (Total station dealer) swung into action quickly. They provided affected residents with tanks of water, which they replenish periodically. While the filling station is quite responsive, I am yet to see any action taken by Total Nigeria Plc.”

Maruf also alleged that “she came back to complain that her pipe connections have been polluted. And I wondered how that could have happened because I had disconnected all the pipes in the affected areas when the leak was discovered while she was away. But I heeded and changed all her pipes again. Note that while other houses have 2000 litres of Geepee tank, I gave her (Ifeamaka’s) house 7000 litres of Geepee tank with pumping machine that takes water directly to her apartment to fulfill her desires’’.

Nonetheless, Maruf said: “She was doing all this after the remediation has been certified okay by the agency in charge. As a matter of fact, we have started digging boreholes, so far, we have dug boreholes in four houses, and the fifth one is ongoing. But she refused to let us dig in her apartment, but we eventually dug it with the intervention of security personnel”.

“However, she still complained that the water is not neat, whereas, water from other houses where we dug the same borehole had no issue, so we suspected she was sabotaging our efforts, especially considering the fact that there is a government borehole in the same house producing potable water.”

Maruf also explained what led to the fuel leakage, as well as steps which were taken to avert future occurrence.

Various documents seen, including eyewitness accounts confirmed that the French oil giant met all requirements as well as restored normalcy to the affected water systems in the area.

The document obtained from LASEMA and LASEPA, dated June 15, noted that contamination of water due to petrol leakage from the station’s underground tank was cleared.

Some landlords in the area said the community was free from any form of contamination, praising the swift response of the management of the filling station after the leakage was reported.

Three landlords confirmed that the environment was safe. One of them, Mr. Razak Odufuwa, who claimed to be the landlord of No. 57, St Finbarrs College Road, Akoka, whose house was affected, admitted that there was an incident but commended the reaction of the company, which he said, acted swiftly to mitigate the effect.

“Initially, when the incident occurred, our water was contaminated and unsafe to drink or for any other domestic purposes. The station was the first to alert us; they disconnected all the water sources and gave us an alternative source of water while they corrected the situation. They have corrected the situation, dug a new borehole in my house and I now have clean water as you can see (drinking water from the tap),” Odufuwa said.

Another landlord, Olusegun Oladipo, of No. 61, St Finbarrs College Road corroborated Odufuwa’s claim, adding that the company responded beyond their expectations as their situation was now better than how it was before the incident. “We now have new borehole with cleaner water supporting the government’s commissioned water system,” he added.

Similarly, another landlord explained that the situation has become a blessing in disguise, saying: “For sure, we were affected by the leak from their underground tank, but the situation has landed us several bore-holes with cleaner water supporting government’s commissioned water system.

“Any accusation against the company is purely malicious and has no basis because the company has done all that was required by law to do and more for us. As such, we are grateful for their swift action to contain the incident and provide an additional water system for the community of Akoka.”

Reports from various expert agencies, presented by the managers, indicated that the community can now go about their daily business without fear or concern. Besides, some dwellers in the area also confirmed to The Nation the swift and consistent response of the station managers towards the crisis, which occurred last August 13.

The Twitter war/ N300m compensation
Despite steps taken by the management of the filling station, Ifeamaka Umeike seems not to be satisfied, further taking the issue to social media platform, Twitter where she launched a smear campaign against the station.

SweetcrudeReports also gathered from Chairman of Akoka CDA, Mr. Adesanya that Ifeamaka is also asking for a compensation of N300 million naira from the station.

“We have been on this issue since last August but the first thing we did was to evacuate people living and selling around the area to avoid a case of an explosion. Afterward, the station was shut down but was reopened around July after necessary remediation had been done,” he said.

On Ifeamaka’s Twitter war and insistence on compensation, Mr. Adesanya described it as “selfish”.

“Any person still insisting on a compensation is selfish. The station already did everything it needed to do. She even benefited from the incident more than other affected people. The dealer was even ready to send residents of the affected houses to the hospital for checkup and treatment but they refused to go to the hospitals provided,” he said.

“In fact, the station made provision at three different hospitals: Lagoon, Mecure, and Clinic at Oshodi but they all refused to go there,” he added.

“The only challenge I see here is that of the compensation being asked for which the CDA cannot meddle into but when it comes to making sure that the lives and health of our people are secured, we had taken the steps and everything had been solved to our satisfaction,” he said.

Another resident, Remi Olaniyan who is also the Secretary of the CDA, condemned Ifeamaka’s attempt to “profit” from what had affected the community.

“Accidents happens so we mustn’t be too hard on them especially because when we went to them, management of the station responded promptly to us. The affected houses have been provided with palliatives so, what else do we want from them? Those still crying are merely seeking to profit from the whole thing which doesn’t speak well of them,” she said.

With all said and done, manager of the station, Mr. Maruf told SweetcrudeReports that the aggrieved lady, Ifeamaka, despite demands for N5 million compensation, and then finally N300 million, had been challenged to go to court, but is yet to serve the station with any letter to the effect.