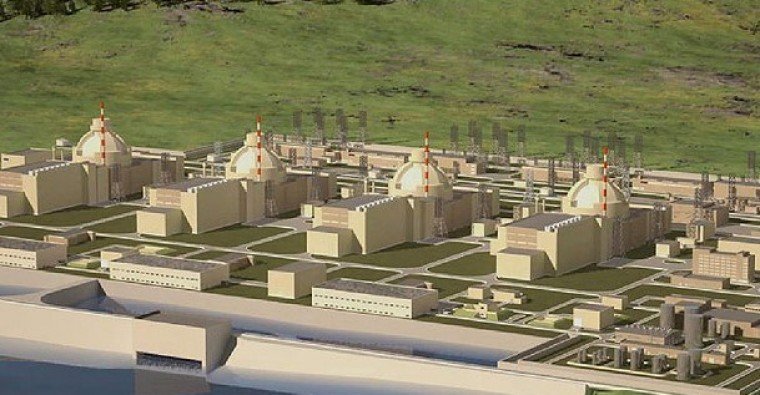 *An engineering schematic of the Akkuyu Nuclear Power Plant.

23 October 2017, Sweetcrude, Ankara — Akkuyu Nuclear JSC, which implements the construction project of the first NPP in Turkey, received from the Turkish Atomic Energy Authority (TAEK) the Limited Construction Permit (LCP) as the first step on the way to obtain Construction License.

LCP allows the beginning of construction and installation works at all facilities of the nuclear power plant, except for the buildings and structures important for the nuclear safety.

«Obtaining of the Limited Construction Permit is a significant step forward for the Akkuyu project implementation. We are actually moving from the preparatory stage to the construction activities at the site. A major part of these construction works will be done by local subcontractors. – said Yuriy Galanchuk, Chief Executive Officer of AKKUYU NUCLEAR JSC. – Our next task is to get the Construction License. We would like to commence construction of the entire set of the NPP buildings and structures at the earliest time possible. Full compliance with all national and international safety standards remains our top priority».

In order to get the Limited Construction Permit, managers of AKKUYU NUCLEAR worked in close cooperation with the representatives of other Rosatom companies, to develop design documentation for Unit 1 of Akkuyu NPP. On March 3, 2017, the Preliminary Safety Analysis Report (PSAR) of Akkuyu NPP as well as Probabilistic Safety Analysis (PSA) and several other documents certifying the safety of Akkuyu NPP, as an integral part of the Construction License Application (CLA), were submitted to TAEK. The issue of the LCP resulted from thorough review and evaluation of the supplied documents by TAEK.

In the coming months, the officers of the TAEK’s Nuclear Safety Department will proceed with its evaluation, inspect the work progress at the NPP site, and then make a report evaluating the Construction License Application. If the evaluation of CLA is positive, then Turkish Atomic Energy Authority will grant the Construction License to the AKKUYU NUCLEAR JSC. That will allow constructing all buildings of the NPP and installation of all systems without any restrictions.

The Construction License is expected to be obtained in the first half of 2018.

The first Turkish NPP Akkuyu is constructed under the Intergovernmental Agreement signed between the Russian Federation and the Republic of Turkey in Ankara in May 2010. On October 13, 2011 the TAEK transferred to AKKUYU NUCLEAR JSC the valid site license; in November 2013 it approved the updated Basiс Site Report prepared by AKKUYU NUCLEAR JSC under the Site License applicable to the Akkuyu NPP construction of the installed capacity of 4,800MW. On December 01, 2014 the Turkish Ministry of Environment and Urbanization approved the Environmental Impact Assessment Report (EIAR) of the Akkuyu NPP project. On February 09, 2017 the TAEK approved the parameters of the Akkuyu NPP site. Month later, On March 3, Construction License Application was submitted to TAEK. According to the Intergovernmental Agreement, commissioning of Akkuyu Unit 1 should occur not later than 7 years after receiving of all construction permits.