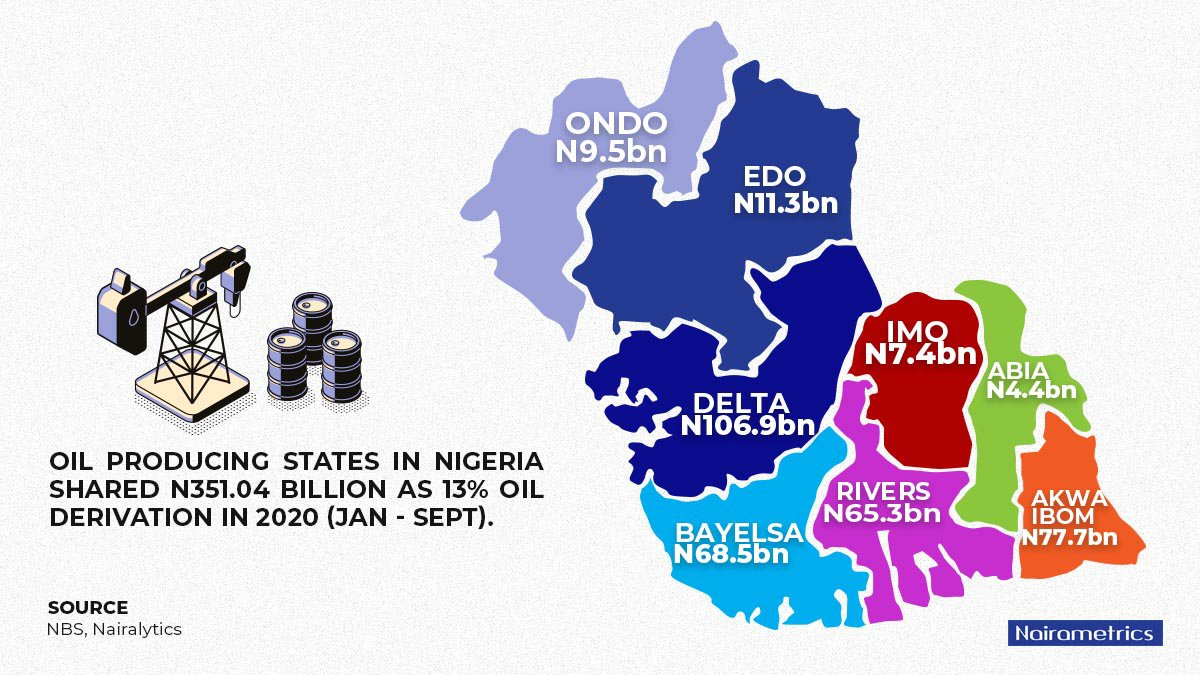 Abuja — Abia, Akwa-Ibom, Bayelsa, Delta and four other oil-producing states in the country, received N6.59 trillion from the 13 per cent derivation fund from the Federation Account from 2009 to 2019, according to a report published by ACIOE Associates.

In the report presented in Abuja, ACIOE Associates listed the other states as Edo, Imo, Ondo and Rivers, noting, however that despite the huge allocation the states still lack basic social and infrastructural amenities, while the funds have not impacted meaningfully on the lives of the citizens.

According to the report, presented by Mrs. Funmi Adesanya, Project Lead, ACIOE Associates, despite the huge fund allocated to the Niger Delta, access to electricity remained low to people in the region; while the people also suffer absence of potable drinking water; deplorable health care facilities; and poor educational infrastructure.

The report stated that: “Most of the basic amenities that exist in the selected oil communities are provided by either joint venture partnerships between the Niger Delta Development Commission (NDDC) or Nigerian National Petroleum Corporation (NNPC) or the International Oil Companies (IOC), as part of their corporate social responsibility.

“This trend is more prevalent in states like Akwa Ibom, Bayelsa and Rivers States where the IOCs provide water, health, electricity supply and education facilities pursuant to Global Memorandum of Understanding (GMOU) agreements between the IOCS and the respective oil producing communities in the aforementioned States.

“There is also lack of a structured framework for commissioning infrastructure projects across the communities, which has left a number of oil producing communities with little or no infrastructure.”

In his presentation, Senior Special Assistant to the President on Niger Delta Affairs, Office of the Vice President, Mr. Edobor Iyamu, said: “Most times, people fail to acknowledge that there are some monies that are paid to the state governments and not many people want to know how it is being spent.

“A lot of money has been disbursed to the state governments, even though we know a lot more still needed to be done in the region.”

In his own submission, Special Assistant to the Minister of Niger Delta Affairs, Mr. Charles Achodo, called for an urgent clarification on the 13 per cent derivation principle to forestall further abuse and mismanagement of the funds to the detriment of oil-producing communities.

He said: “When 13 per cent is given, the governors share it among themselves. On the part of the Federal Government, they have done a poor job in terms of communication. It is supposed to clarify what the 13 per cent is meant for, if it is for the state or for the communities where the oil is produced from.

“The Act made it so broad; it did not specify the issue. The Act needed to be clarified, that it is not meant for the entire state, but for the oil producing communities. Taking the resources at that subsidiary levels would help achieve a lot at that level.”

However, in its recommendations, the report advocated the legislation of fiscal rules to improve transparency and accountability of public expenditure as practiced in Ghana and Uganda.

Such rules, it noted would bother on uniform vertical transfers of derivation funds to curb the practice of discretionary transfers currently practiced by Niger delta States; and the prescription of adequate budget preparation procedures that ensures a proper needs assessment of the intended beneficiaries are carried, ahead of prospective budget implementations.

It added that it would also bother on the development of resource allocation criteria that are ‘downwardly accountable’, particularly to the intended beneficiaries of the derivation funds; consistent publishing of fiscal information and ensuring access to such information; and earmarking a considerable proportion of the derivation funds for specific sectoral development such as health, education, facilitation of portable water, among others.