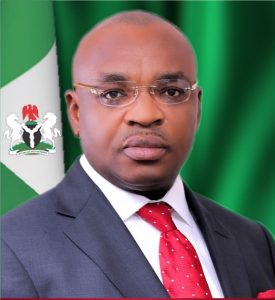 Port Harcourt — As a way of reducing dependency on fossil fuel, Akwa Ibom State government has said that modalities are being put in place for the conversion of waste to electricity, fuels, heat, recyclables, value-added products, and chemicals.
Chairman, Akwa Ibom State Environmental Protection and Waste Management Agency, Prince Akpan Ikim, who disclosed this while briefing newsmen in Uyo, said the state generates over 15,000 tons of waste on a daily basis.
Ikim said the agency has been repositioned to ensure that waste generated in the state are converted to aid power supply and boost the state’s revenue base.
He added that the Refuse-to-Riches scheme of his agency would create jobs and business opportunities that measured up with global best practices on waste management system.

“With a clear-cut vision, AKSEPWMA integrated workable schemes to maximize the waste-based revenues in the form of energy, fuels, heat, recyclables, value-added products, and chemicals along with more jobs and business opportunities that measured up with global best practices on waste management system.
“To achieve this, a dialogue was imperative, thus. The agency held a maiden stakeholders dialogue – an event that played host to a wide range of professionals, consultants, researchers and stakeholders etc on waste management in Uyo, the Akwa Ibom State capital.
“Waste in the 21st century is wealth but takes technicalities in the conversion process, for which reason the dialogue was held.
“Akwa Ibom has been launched into a new phase where waste would no longer be seen as refuse or discarded material, but an asset or resource to reduce not only the landfill volumes but also the dependency on fossil fuels by generating cleaner energy.”
Ikim further said measures have been mainstreamed to curb irresponsible attitudes towards waste disposal in the state, through the 3E – education, enlightenment and enforcement.
“As the Chairman of the agency, I am keen on recreating a State of Refuse-to-Riches, where waste generated in Akwa Ibom will be converted to aid power supply and boost our revenue base.
“The issue is what could be made out of the waste? On that, AKSEPWMA is poised to convert the generated waste to wealth. This was a puzzle that birthed the Refuse-to-Riches Dialogue – a dialogue that beamed a green light to another source of revenue to the State government through waste conversion.”