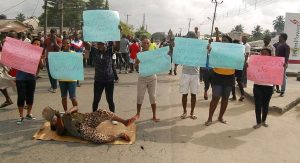 *Ikpa-Ibekwe youths on protest against IPC

Leader of the protest and Ikpa-Ibekwe Youth President, Mr Benjamin Friday, said it was regrettable that having played host to IPC for 20years now, Ikot Abasi has been in darkness, while electricity is taken from the community to other parts of country.

Friday explained that the protesting youths will continue the protest until electricity supply returns to Ikot Abasi.

He said the clan has been disconnected from the national grid since 2018 , adding that they have been suffering environmental hazards due to operations of IPC, yet nothing to show for it.

“Ikpa Ibekwe is the landlord and host community of IPC. Since they began their operations here, there have been no Memorandum of Understanding or any form of Corporate Social Responsibility.

“There has been no employment of our people in the company, no Ikpa-Ibekwe indigene is in the management cadre of IPC.

“For three years now, there has been total blackout in the whole of Ikot Abasi. All we need now is electricity supply or they should pack their property and go.

“In December 2018 and January 2019, we had a meeting with the management of IPC and the state government in Uyo, where IPC claimed they could not give us power because there are no transformers. The governor provided transformers for them to supply electricity, only for IPC to renege on their promises.

“So we are saying enough is enough. We are not going to leave here until the management of IPC and Akwa Ibom State Government come out to address us.”

Also speaking, a former Youth President of Ikot Abasi, Mr Imeodu Ukpa, said they have tried engaging the Port Harcourt Electricity Distribution Company, but it was exploitative as each house in the area was billed over N10,000 per month.

“Before now, Aluminium Smelter Company of Nigeria, ALSCON used to give us electricity until 2013 when ALSCON packed up.

“PHEDC now came and be exploiting us. They give us two hours of supply in a week and then give estimated billing of N10,000 per house.

“We are the host community to IPC and we deserved power supply. We are tired and we can’t take it any longer. For over 20years now, since the inception of IPC, we have not benefited anything from them.

“We don’t want PHEDC to supply us electricity, we want direct supply from IPC. We will remain here even if it will take one year, all we want is power supply. We have even start cooking here.”

For his part, a stakeholder in Ikpa-Ibekwe Youths Association, Mr Victor Richard, said by tomorrow, all markets, filling stations and shops in Ikot Abasi will be shut down, so that everyone will join in the protest.

He also affirmed that the people were suffering from the carbon monoxide and other toxins due to the activities of IPC, hence, deserved power supply.