All the noise about OML 11 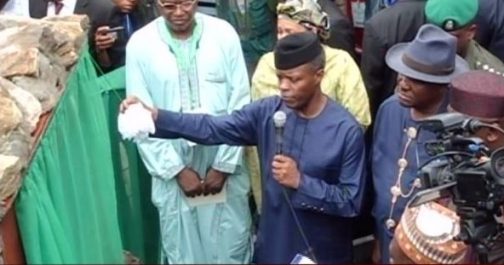 *Vice President Prof Yemi Osinbajo representing President Muhammadu Buhari during the flag off of Ogoniland clean up in Rivers state.

Port Harcourt — I have a friend who is of the view that government is a mystery, and that the ways of government are mysterious. This domestic philosopher, or, as he calls himself “thinker,” will thrill you with his scenarios and suppositions, but each time he is in his elements, all we feel we owe him is a good laugh or well-directed sneer. But now, I repent “in dust and ashes” because somehow, my friend is having the last laugh, as he may be right after all. It is all about the OML 11 matter. This licence area has had its fair share of fame and perhaps, shame. It hosts Nigeria’s first oil and gas terminal built by The Shell Petroleum Development Company of Nigeria Ltd (SPDC)-operated joint venture in 1971 among other facilities, and then the Ogoni production area.

Last week, OML 11 returned to the harsh limelight when the Presidency issued a half-page statement directing the Nigerian Petroleum Development Company (NPDC) to take over the operatorship of the “entire OML 11 from SPDC not later than April 30, 2019.” But what the March 1, 2019 communication lacked in length it packed in controversy and (if you believe my friend) mystery. NPDC, Shell, and Ogoni dominated discussions in corporate boardrooms and community halls. NPDC, a subsidiary of the Nigerian National Petroleum Corporation was established 30 years ago, and currently boasts a daily average production of 250,000 barrels of oil per day with plans to increase this by 100 percent by 2020. Of course, Shell or its arm, SPDC is part of the Nigerian narrative having produced and exported the first barrel of oil from Nigeria, and the operator in Ogoniland until 1993 when it was forced out by community agitation.

The directive from the Presidency has been subjected to massive misinterpretations and lopsided analysis, and the media and commentators have worsened the situation as they fail to lend the much-needed insight and perspective. Going by what we hear them say you would think they just dropped from planet mars. People say the statement should have been issued by the Minster of State of Petroleum, Dr. Ibe Kachikwu, and they think the Presidency is sidelining this lawyer. But look again at Dr. Kachikwu’s job title – Minister of State for Petroleum. The Minister of Petroleum is Muhammadu Buhari, so whether him or Ibe, it doesn’t really matter here.

I am rather more worried by the use of a six-letter word “entire” which appears twice in the statement. It is not known whether the Presidency deployed it advisedly or impulsively. This is because, as stated earlier, OML 11 straddles fields and facilities from Port Harcourt to Bonny including Ogoni. In addition to Bonny Terminal, the OML comprises 33 oil and gas fields, the Afam VI Power Plant, the Okoloma Integrated Oil and Gas Plant and then, this will surprise you, the SPDC residential area, a sprawling living quarters for Nigerian and expatriate staff. Over the years, people make the popular mistake of meaning only Ogoni when referring to the entire (that word again) OML 11. By using that dangerous word, is the Presidency thinking of all the assets in the licence area or only Ogoni?

I strongly suspect media reports and headlines from the statement would have caused additional headache to even the authors of the statement. “OML 11 licence revoked,” one newspaper headline screamed, conveniently forgetting the difference between licence and operatorship. Even if the Presidency had authorised an omnibus transfer to NPDC, this should not have been mistaken for the licence which is the legal backing for operatorship. It was mildly reassuring that another newspaper reverted with a better headline “OML 11 licence not revoked, NPDC becomes operator May 2.” One is tempted to join the English poet Geoffrey Chaucer to ask, “If gold rust what then will iron do?”

Apart from getting it wrong, media reports also worryingly miss out on an earlier communication from State House on the change of operatorship of Ogoni fields and assets. While meeting the Nigerian community during a visit to South Africa on June 4, 2008, the late President Umaru Musa Yar’Adua announced that NPDC would take over the operatorship of the fields in Ogoniland. The then President had declared “there is a total loss of confidence between Shell and the Ogoni people,” and as such, another operator was needed to operate the fields that had remained dormant since SPDC hurriedly left the area.

This order led to a handshake between NPDC and SPDC which led to the handover of assets, in what we all hoped would close the door to the decades of pollution and acrimony in that part of the Niger Delta. But these hopes have been dashed. No oil has flowed from Ogoniland and the environment is even polluted more by continuing sabotage and pipeline breakages. To compound the situation, we have a clash of interests and personalities built on ancient grudges and unrealistic aspirations. If the Presidency took this context into adequate consideration, the directive issued on March 1 would have been more circumspect and more categorical. For example, why has NPDC or anybody for that matter not been able to resume oil production in Ogoniland since 1993? The Federal Government seems to admit the failure of the 2008 order and, instead expanded its scope and reach by a stroke of the pen. And if the truth be told, NPDC, even if suddenly staffed by angels, does not have the capacity to manage the whole (I’m trying to avoid that word) OML 11. Also, as some economists point out, can a government anxiously seeking foreign investments as a lynchpin for its economic transformation agenda, afford to give the impression of decree-like instructions that can force potential investors to think twice before coming over?

We will leave these and other questions for NPDC and the Presidency but a few urgent steps are needed to stop the negative noise on the true situation about OML 11. The Presidency, on the cusp of an inauguration for a second tenure, cannot bathe us with this level of anxiety and benumbing murkiness. And of course, there is the environmental issue. While the UNEP Report of 2011 sets out a clear plan for remediating the pollution caused by oil production and worsened by illegal bunkering, the reality on the ground does not raise hopes or cause any celebration. The Ogonis said as much when they said the latest directive from the Presidency is a ruse to resume oil production while the environmental challenge persists. So what happens next on the March 1 letter? Only time and the Presidency can tell.