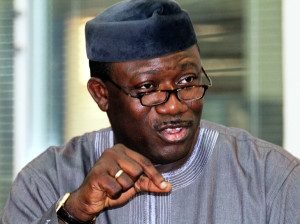 Fayemi had on Sunday, January 21, announced the signing of the deal which will take effect in six months time.

However, the agreement did not sit well with BFIG’s Executive Vice President/General Counsel, Jimmie Williams, who in a letter dated February 7, 2018, threatened to sue both parties to court over their continued disregard of the Supreme Court’s ruling to put the concession on hold pending the time all ongoing investigations on the asset will be concluded.

Director General BPE, Alex Okoh, signed the agreement for the Federal Government, while CEO/Member of the Board of Directors UC Rusal, Vladislav Soloviev, signed on behalf of his company.

The Federal Government, however, retains 20 percent equity in the company.

However, in the letter by BFIG Counsel to both the Minister and BPE DG, Mr. Williams argued that he was never in the know of any resolution negotiation of its outstanding disputes over ALSCON, describing Fayemi and Okoh’s roles in the latest agreement signing as “extremely disrespectful and disturbing.”

Fayemi had said the Russians were the “best placed to reactivate ALSCON”, while BPE DG reportedly hailed Fayemi for his “commitment to ensure the success of the negotiation with the Russians.”

“As you are both well aware, there has not been any settlement involving ALSCON,” Mr. Williams said in his letter titled: “Publications of Injurious Falsehoods Against BFIGroup Corporation Concerning the Aluminum Smelter Company of Nigeria (“ALSCON”) Share/Sale Purchase Agreement.”

“Our (BFIG) litigation over the enforcement of the Supreme Court’s order is continuing, and the Minister has not negotiated any mediated resolution of our outstanding disputes,” the statement read.

Warning of legal actions to be filed against the duo, Mr. Williams then urged the parties to withdraw their statement that the Russians were the best for the contract, as their “continued unimpeded publications of these false reports are extremely injurious” to BFIG.

“Please be respectfully advised that we will resort to additional legal processes if we do not receive a positive response to our requests,” the statement added.

Government said it took the decision to intervene, putting an end to the dispute over ALSCON at the meeting of the National Council on Privatization held in August, 2017 under the chairmanship of the Vice President, Prof Yemi Osinbajo, where the council approved an out of court settlement between the FGN, BFIG and UC Rusal through mediation with the active collaboration of Ministry of Mines and Steel Development.

However, BFIG’s Chief Executive, Reuben Jaja on January 21, had said the signing would be challenged especially because hearing in the appeal filed by the government against the Supreme Court’s ruling on the SPA was scheduled for Tuesday, January 23, just a few days after the new agreement was signed.

“Our lawyers are going to challenge it. This is the highest level of impunity. How can a Minister supervise the signing or renewal of SPA voided by the Supreme Court? This blatant disregard of the rule of law by the man and his foreign collaborators must be stopped,” Jaja said in a statement.

“UC Rusal is fully aware that on October 17, 2017, BFIGroup executed a mutually agreed Share Purchase Agreement provided by BPE, and upheld by the Federal High Court in order to fully enforce, fulfil and give effect to the meaning and intendment of the judgment of the Supreme Court. Till date, BPE is yet to execute the SPA as directed by Court”.

“Consequently, this desperate and fraudulent conspiracy by the Minister to undermine, frustrate, and ridicule the judgment of the Supreme Court is mind-boggling.

“We believe the Minister misled the NCP and the President right from his first visit to ALSCON and the contemptuous comments he made, which showed his ignorance on the ALSCON matter.”

In November, the High Court of the Federal Capital Territory, Maitama had said enforcing the Supreme Court order of July 6, 2012, remained the most viable option to resolve the lingering crisis over the sale of ALSCON.

In his November 8 ruling in suit No FCT/HC/CV/522/2011 by BFIG against UC RUSAL and its allies, the judge, Jude Okeke, said enforcing the order was the best remedy for aggrieved parties in the dispute over the ownership of the $3.2 billion plant.

The Supreme Court had issued “an order of specific performance” directing the Bureau of Public Enterprises, BPE to reinstate BFIG as the winner of the bid for the sale of ALSCON.

In its place, the apex court ordered the privatisation agency to provide the “mutually agreed share purchase agreement, SPA,” negotiated in 2004 for execution, to enable BFIG to pay the agreed 10 percent of the accepted price of $410 million within 15 working days from the date of the execution of the SPA.

Besides, the court placed an order of perpetual injunction restraining BPE from inviting any other bid for the sale of ALSCON.

In his 47-page judgment, the judge said the Supreme Court’s ruling had finally laid to rest contentions about the right to ALSCON.

“The Supreme Court held that the acceptance of the bid price of $410 million by BFIG for the acquisition of 77.5 percent shares as core investor in ALSCON on June 14, 2014 constituted a binding contract with BPE, while the declaration of the company as the preferred bidder by the NCP (National Council on Privatisation) as valid, extant and irrevocable,” the judge ruled.

In February 2013, BFIG filed the case against BPE for the refusing to uphold the Supreme Court order for its reinstatement after the NCP had declared it the winner of the bid for ALSCON.

Other defendants in the case included UC Rusal and its allies, JSC Bratsk Aluminium Plant, Rusal America and Dayson Holding.

BFIG accused them of conspiracy to defraud, unfair competition and ‘tortuous interference’ in its contractual relations over prospective business advantage in the acquisition of ALSCON.

The Nigerian government and the Attorney General of the Federation, AGF was later joined, for failing to take steps to enforce the Supreme Court order.

Although ruling in the case was first scheduled for September 26, 2017, it was reserved tillNovember 8, as the judge requested a postponement, to enable him to recover fully from a medical condition.

Later, in his judgment, Mr. Okeke noted that the Supreme Court, by its July 6, 2012, ruling, agreed that BFIG was unfairly treated by the “illegal cancellation of the contract of the sale of ALSCON and subsequent resale of the plant to UC Rusal.”

Regardless, the judge decided to strike out BFIG’s application, arguing that it was difficult granting its damages against the Federal Government of Nigeria and the AGF, despite their refusal to uphold rule of law.

The judge noted that since the Supreme Court had already made an order of specific performance in favour of BFIG against BPE, granting damages would not only amount to double compensation but also be capable of creating legal chaos and lawlessness.

“BFIG cannot in one breath hold the judgment of the Supreme Court in which it was granted specific performance of the contract with the Nigerian government through BPE, and in another breath hold a judgment entitling it to damages against the same government. This will be the most absurd legal anomaly, which this court must not allow to happen,” the judge ruled.

“Even if the value of ALSCON has depreciated over the years due to mismanagement…, an enforcement of the (Supreme Court) order, taking its current value into consideration, is more attainable and will avail the plaintiff (BFIG) at a time its contract appears frustrated by a combination of circumstances, rather than action of this nature,” the judge explained in his ruling obtained exclusively by Premium Times.

In his reaction to the court ruling, Fayemi, through his spokesperson, Yinka Oyebode, had said as far as the Ministry was concerned, the National Council on Privatisation has met the conditions outlined by the Supreme Court.

Since 2012, government officials had done every other thing, except enforce the Supreme Court order to resolve the crisis.

The letter was accompanied by a 16-page SPA, instead of the 58-page SPA sent earlier on October 8, 2012, for BFIG’s review and approval.

The execution of the SPA was stalemated, as BFIG rejected it on the ground that it was not interested in acquiring the shares of the ‘Aluminium Shelter Company of Nigeria’

In April 2017, Fayemi had visited ALSCON and was received by UC Rusal’s managing director, Dimitriy Zaviyalov.

During the visit, Fayemi had assured the Russians of government’s commitment to “free the complex of any encumbrances”, regardless of the pending Supreme Court rulings.

Close watchers of the crisis had criticised Fayemi over the visit, but, he insisted there was no ulterior motive other than an attempt to find solutions to the crisis in the larger interest of Nigeria.

Later in August, the minister was also mentioned in a fresh attempt by UC RUSAL to negotiate with BFIG and get it to trade its right to ALSCON guaranteed by the July 6, 2012, Supreme Court order.

Mr. Fayemi, along with BPE DG, Alex Okoh, and other officials, were said to have been present in the meeting along with UC Rusal agents, where overtures were reportedly made to BFIG.

The minister, however, said the meeting was still part of his, “effort to find an amicable settlement of the crisis.”