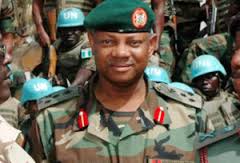 The Special Adviser to the President on Niger Delta Affairs and Coordinator of the amnesty programme, Brig. Gen. Paul Boroh (rtd), revealed this Wednesday at a media briefing in Abuja.

He reaffirmed his earlier position that the amnesty programme would be terminated in 2018.

Brig. Boro said the planned disarmament was conceived as part of ongoing efforts by the Amnesty Office to actualize its objective of sustainable peace in the oil region and Nigeria at as a whole, adding that it would only be restricted to only those youths ready and willing to lay down their arms in the interest of peace in the country.

‘‘We hear of some persons wanting to disarm at Arepo, and we have written to the appropriate authority to allow us disarms them. There are also some elements that want to do same in Delta, Bayelsa, Rivers, Akwa Ibom and Cross River states.

“There are some of those persons that were displaced in Bakkasi and are willing to disarm as well. It is a good thing for Nigeria that some people want to disarm. Nigeria cannot be a country that arms litter about and UN does not want to associate with such countries,” said Boro.

According to him, about 1500 persons have so expressed interest to disarm in Arepo, while in Bakassi and other Niger Delta areas, the number of those to disarm is yet to be ascertained as verification is still ongoing.

He also told the press that the amnesty programme had entered the last phase of the disarmament, demobilization, rehabilitation, reconstruction, reinsertion, reconciliation and reintegration of the ex-agitators, and appealed to all relevant agencies of government and private sector to assist the amnesty office in engaging the beneficiaries.
– Vanguard