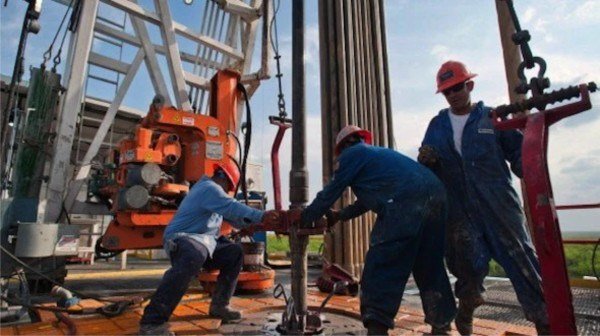 *Oil workers at work on a rig.

*The Nigerian experience with marginal oil field development had measurable success, with 24 licenses awarded to 31 companies, some as sole operators and others as joint-ventures

14 January 2019, Sweetcrude, Johannesburg, South Africa — With production declining and investment scarce, the Angolan leadership has put in place a number of new policies to reboot its oil industry and propel economic development.

However, those changes take time and renewed deep-water oil and gas exploration for fresh reserves will take years to yield the desired results and stop the daily production crunch.

In the meantime, the government is targeting what it already knows exists, the country’s multiple deposits of what has been dubbed marginal oil fields, which will go on sale this year during the Angolan Marginal Field Bid Round.

Marginal fields are defined by reduced profitability or lack of commercial viability. These can, at times, represent considerable amounts of crude oil in the reservoirs, but that, due to cost recovery processes, are not worth the investment under the existing legal and fiscal framework.

In the Angolan deep offshore, several of these prospects have been found over the years and dismissed in the pursuit of more profitable opportunities.

However, in the wake of the lack of investment in exploration in the country over the last four years, these marginal reserves have become more relevant for Angola’s macro-economic outlook.

So, in May 2018, President Lourenço’s government published a new framework specifically designed to promote investment in these areas.

According to the official text, the law considers marginal fields those discoveries with proven oil reserves of less than 300 million barrels (exceptions are considered for bigger reserves in particularly expensive working conditions), standing at or below 800 meters of water depth, that do not give returns to the State of more than USD$10.5 cents per barrel, returns for the operator of no more than USD$21 per barrel and that have an average return on investment after taxes of less than 15%.

For those that fit these conditions, the government offers extensive tax and fiscal benefits, as well as, easier conditions for cost recovery, in order to make those reserves commercial and promote their development.

Angola is not the first to try this tactic. In 2003, Nigeria had already had a bid round for its marginal fields with a certain degree of success. The majors are not likely to be particularly attracted by these relatively small prospects, but they represent a great opportunity for smaller independent African and non-African oil and gas companies that can work efficiently and with less overheads than its bigger counterparts while having the business certainty of working prospects with guaranteed reserves.

The government is hoping that development in these marginal fields will help raise the current crude oil production (expected to be stagnant in the run-up to 2022), while it promotes renewed investment in exploration and production in unexplored acreage.

The Marginal Fields Bid Round is expected to be launched in Luanda in June 2019 at the Angola Oil & Gas Conference, organized by Africa Oil and Power with the endorsement of the Angolan Government. It is likely to include onshore and offshore blocks in the Congo, Namibe and Cunene basins, and has already received considerable attention from industry players in the region.

Lessons learned
The Nigerian experience with marginal oil field development had measurable success, with 24 licenses awarded to 31 companies, some as sole operators and others as joint-ventures. The 2003 marginal field bid round opened a number of opportunities to local and regional industry players while it contributed to increase the country’s oil output and promoted indigenous participation in petroleum upstream activities.

For companies like Oando, Waltersmith, Shoreline Energy, Seplat, Sahara Petroleum or Brittania-U, these fields represented important opportunities to farm-out some acreage from the majors and lead their own projects. While some developments have been slower than expected, the outcome of the process was mostly successful. Today, around a third of the licenses issued produce meaningful amounts of crude oil.

However, there are a couple of lessons to be learned from the Nigerian experience that apply to the Angolan reality. Firstly, marginal fields are particularly attractive for smaller indigenous or regional companies that can operate well with smaller profit margins. These companies are also much more cash-strapped than the likes of ExxonMobil or Total and therefore need investment capital to develop their acreage. The Nigerian experience tells us that seeking capital in the local financial sector can be challenging. Nigerian banks have been resistant to awarding credit lines to small operators in this kind of project. Normally, banks issue loans against equity or assets used as collateral. These oil operators’ attempt to use the oil reserves as collateral hasn’t been well accepted by the Nigerian financiers, and that has delayed field development. This means that inviting foreign partners with access to capital becomes paramount. Local Angolan companies are advised to seek the partnership of mid-size players like Tullow Oil, Trident, Kosmos, Noble, Perenco and many successful Nigerian oil firms, with extensive African experience and available liquidity that can help them progress and be successful in their endeavors.

Secondly, there is the issue of legal clarity. The Nigerian Petroleum Industry Bill, which in its many forms has been under discussion for over two decades, continues to create disruption and uncertainty in the industry and delaying new bidding rounds. If the current form of the bill is approved, marginal field operators are expected to receive significant cuts in the taxes and royalties, but that remains unclear for the time being.

On that second note, the Angolan government’s action must receive praise. In record time, a simple and clear framework was created for the marginal fields concessions. It will be important that action is also taken in finding solutions to facilitate the financing of many of these projects so that these efforts have a measurable impact on the country’s oil industry. A December 2018 article on the Nigerian newspaper The Oracle, titled “Angola pulls investment attention off Nigeria”, blamed the ease of doing business and clear fiscal framework created for the marginal field bid round taking place in June as the main drivers in moving investors from the complicated dealings of Nigeria into the Angolan market, a sign of a job well done by the Lourenço administration.

In sum, Angola’s journey towards revitalizing its oil industry and boosting production is already yielding positive results, with the perception of international investors already shifting towards a more positive outlook. Just in December, ExxonMobil and BP have pledged new investments in the country, while French Major Total launched its USD$16 billion Kaombo project in November and indicated further investment in the country in the near future.

These are important developments at a time when Sonangol tries to restructure and recapitalize to once again focus on exploration efforts.

At the same time, the exploitation of the country’s marginal fields within this new framework has the potential to, alongside steps to extend the life of declining fields, help maintain oil output as new major projects are developed.

If all continues in the direction it is now, it stands to reason that within three or four years we could again see the Angolan oil industry flourish.

However, good governance and business-friendly policies coupled with clear fiscal and legal frameworks need to continue to be developed and upheld if the promise of the Angolan oil industry is truly to be fulfilled.