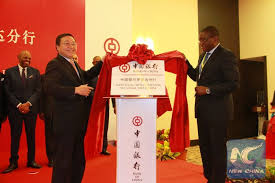 11 June 2017, Luanda — The opening of the Bank of China, BOC, in Luanda, whose operating activity has started in the financial region of Talatona, represents a better business environment in Angola, said the chairman of the Angola/China Chamber of Commerce, Arnaldo Calado.

The financial institution, whose doors are open this Tuesday in Talatona to businessmen, is focused on investment banking, that is to say, the corporate segment and the branch is already starting with a base of more than 100 customers that are Chinese companies that operate in Angola.

In addition to the Chinese firms, there are Angolan businessmen interested in having the bank of China as their financial services provider, but Arnaldo Calado believes it is important for the bank to open its doors to facilitate commercial transactions between the two countries, among others.

With the installation of the branch of the second largest Bank of China, according to Arnaldo Calado, the Angolan financial system is more solid and robust, as Angola needs to make payments abroad and the Asian bank can serve as a correspondent bank in the process of intermediation of commercial transactions.

“We need to make payments, entrepreneurs need to make payments, and to do so, and as the Finance Minister said, he expects the Bank of China to make a payment not only to China but also to the world. Because we are talking about the fourth largest bank in the world “said the head of the businessmen’s group in the country on the sidelines of the bank’s inauguration ceremony in Luanda.