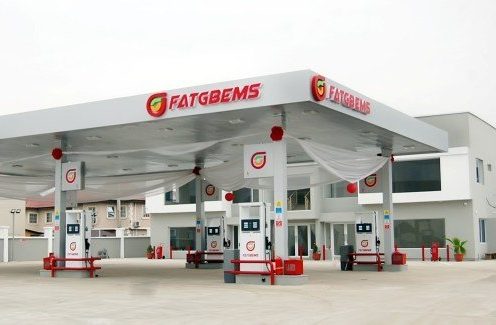 Lagos — A video doing the rounds on the internet has captured moments when angry customers stormed Fatgbems petrol station opposite NNPC along governor’s office, Abeokuta for dispensing water instead of petrol to customers.

The unfortunate incident occurred on Sunday.

According to the video, customers were seen and heard shouting “water” at the top of their voices, while at the same time ordering one of the sales representatives to pour the content on the floor as proof of their accusation.

As the video played on, one of the angry customers forcefully collected the pump from one of the sales attendants, and poured the content on the floor.

“See! You see! Fatgbem has been selling water to us instead of petrol. This is crazy! This is my car”, one of the angry customers nagged.

Gun-wielding policemen were also spotted at the scene of the incident.

As arguments ensued, a disruption to the video could be heard underground, as SweetcrudeReports perceived there was a scuffle between the recorder and probably the manager of the station.

Responding to the video, an official statement has been released by the Fatgbems management, attributing the incident to “water overflow into the station storage tank”.

It appealed to customers and the public to “stay calm” as measures have been put in place to address the issue.