04 September 2015, Abuja – Residents of Arepo community in the Obafemi Owode Local Government Area of Ogun State, have lamented the deplorable condition of the access road linking Arepo to the Lagos-Ibadan Expressway, urging the government to come to their rescue.

The residents, who spoke through one of the landlords’ association ─ Journalists Estate Residents Development Association ─ called on the state Governor, Ibikunle Amosun, to intervene in the situation. 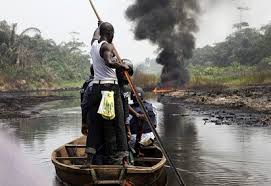 Speaking on behalf of the residents, the JERDA Chairman, John Ajayi, and the Secretary, Jude Nwauzor, said the government had put a billboard on the road for about two years, without commensurate action.

They said, “The road is in a deplorable condition. It is the only access road linking Arepo to the Lagos – Ibadan Expressway, and for almost two years that the contract had been awarded, there is no execution.

“We urge the governor to go beyond mounting of billboard to the physical development of the area.

“The state government should, as a matter of urgency, order the contractor to commence construction of the road as promised by the governor during his electioneering in the area.

“We also urge the Federal Government to ensure the protection of the Nigerian National Petroleum Corporation pipelines in the area.

“The Arepo community has over 18 other estates existing in the community with enlightened Nigerians.”

The residents also urged the Federal Road Maintenance Agency to continue its work on the long bridge by clearing bushes on the median of the expressway so as to guard against hoodlums, who molest and rob motorists.