Army gets gun-boats to fight oil theft in Niger Delta 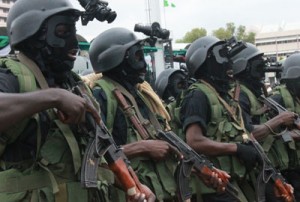 Olaniyi said this while inaugurating five projects at the 13 Brigade Command, Calabar.

He said that oil was the major revenue source for the country and stressed the need to preserve it for economic growth of the country.

“Officers of the Nigerian Army are very alert on the waterways; if anybody is caught stealing the country’s oil, he or she will face the law no matter how highly placed the person may be,” he warned.

He expressed delight at the programme, adding that the commissioning of the projects in the command would enhance operations and welfare of personnel.

The projects include mini-supermarket, warrant officers’ mess, lawn tennis court, colonial block and transit accommodation. He commended the commander of the brigade, Brig.-Gen. Okwudili Azinta, for the successful completion of the projects within six months after resuming office.