Army hands over .680m litres of petrol, 17 trucks to EFCC 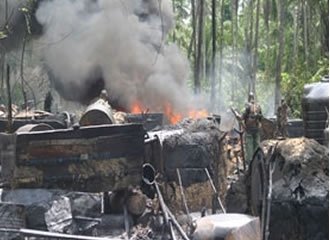 20 October 2018, Sweetcrude, Port Harcourt — The Nigerian Army, Six Division Port Harcourt, on Friday handed over to the Economic and Financial Crimes Commission, EFCC, 17 trucks with over 680,000 litres of petroleum products, impounded about two weeks ago, for prosecution.

Recall that the six Division, earlier this month uncovered an illegal oil depot at the facility of defunct Union Dicon Salt premises in Macobar jetty, Port Harcourt, where it arrested two suspects and impounded 17 trucks.

Speaking to newsmen, the General Officer Commanding Six Division, Major-General Jamil Sarham, said the army was winning the war against oil theft and the division currently has over 300trucks at its trailer park, impounded for being used for illegal activities.

“The division set up a special task force which we nicknamed Six Division Special Company, specifically responsible for anti-bunkering activities.

“It is part of the activities that you would recall some few days back, some massive arrests were made and 17 trucks were found to be illegally loading petroleum products, and from our observation, these products were also illegally refined.

“At our trailer park, we have over 300 trucks and vehicles that have been impounded during various operations conducted against anti-bunkering criminals.

“Each of these trucks is a 40,000 litres capacity and that can give you the estimate of what 17 trucks can carry.”

Receiving the trucks, the South-South Zonal Director of EFCC, Mr. Nnaghe Obono-Itam, said the agency would carry out more investigation before prosecuting the suspects.

Obono-Itam, represented by an officer from Asset Forfeiture and Recovery Department, Mr. Abdulhamid Bawa, said the agency will take samples of the products to the Department of Petroleum Resources, DPR, for the test.

He explained that EFCC would prosecute owners of the trucks if the result from DPR shows the products were illegally refined.

“I am here to take over the trucks and products impounded by the Nigerian Army. After taking over, we will send the products to DPR for the test. If it is genuine, there is no case; but if it is confirmed that the product is adulterated, then there will be a case.”