As big oil stumbles, Total manages to stay on its feet 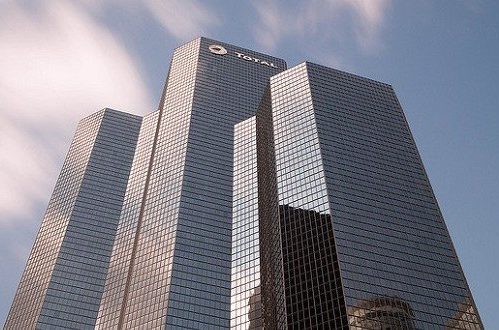 Paris — Europe’s oil giants came into 2020 promising shareholders they can “do it all” — maintain generous dividends, keep the crude flowing and make a historic shift toward clean energy. Only one of them may succeed.

Since the coronavirus pandemic wiped out oil demand, Royal Dutch Shell Plc shocked investors with its first dividend cut since the Second World War, while BP Plc announced 10,000 jobs cuts and the sale of its chemical business as debt soared. But Total SA has so far weathered the storm, and investors are confident Chief Executive Officer Patrick Pouyanne can avoid his rivals’ stumbles.

They see the French company as an early adopter of clean energy, with multi-billion investments in solar, wind and batteries, but also a rare haven in an industry shattered by the slump in energy prices.

“Total has probably the best balance sheet among the majors,” having spent its money wisely in recent years, said Laurent van Tuyckom, who manages high-dividend funds at Degroof Petercam Asset Management in Brussels. “We’re much more cautious on other heavyweights of the industry.” 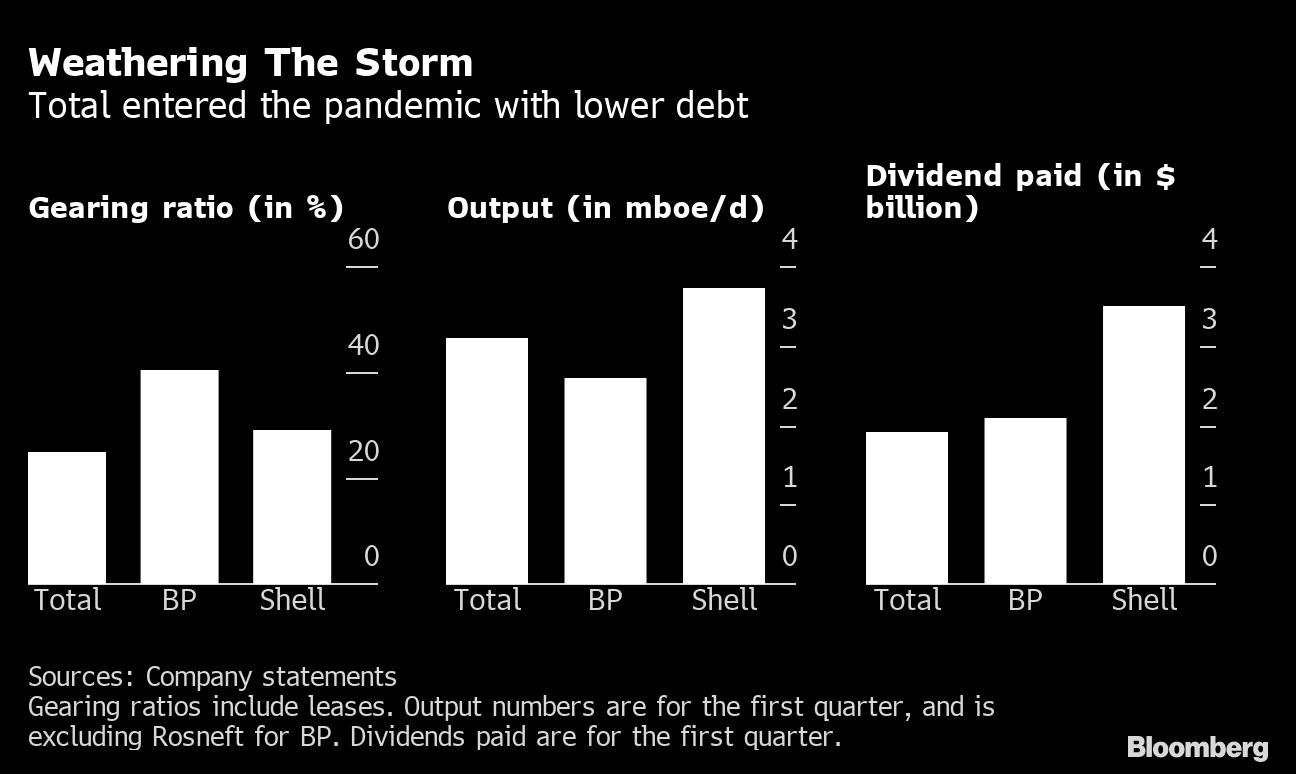 Total has taken steps to mitigate the effect of the downturn. It has cut costs, suspended a plan to increase its dividend by 5% to 6% per year, halted share buybacks, and given investors the option of taking the final quarterly dividend for 2019 in shares instead of cash. It also announced a plan to eliminate 1,000 jobs in France at a petrochemicals unit, and potentially more abroad.

Those measures will save $7.5 billion this year, meaning the company can fund its major oil and gas projects, invest as much as $2 billion in low-carbon assets and keep paying its dividend even if oil remains at about $40 a barrel, Pouyanne has said. The payout will rise again when the economic situation has normalized, maybe from 2022, he said.

Asset managers are confident Total can maintain its payout until the markets starts to recover. Most investors seem to agree, as the French company has the lowest dividend yield among its European peers, even after Shell’s two-thirds cut. 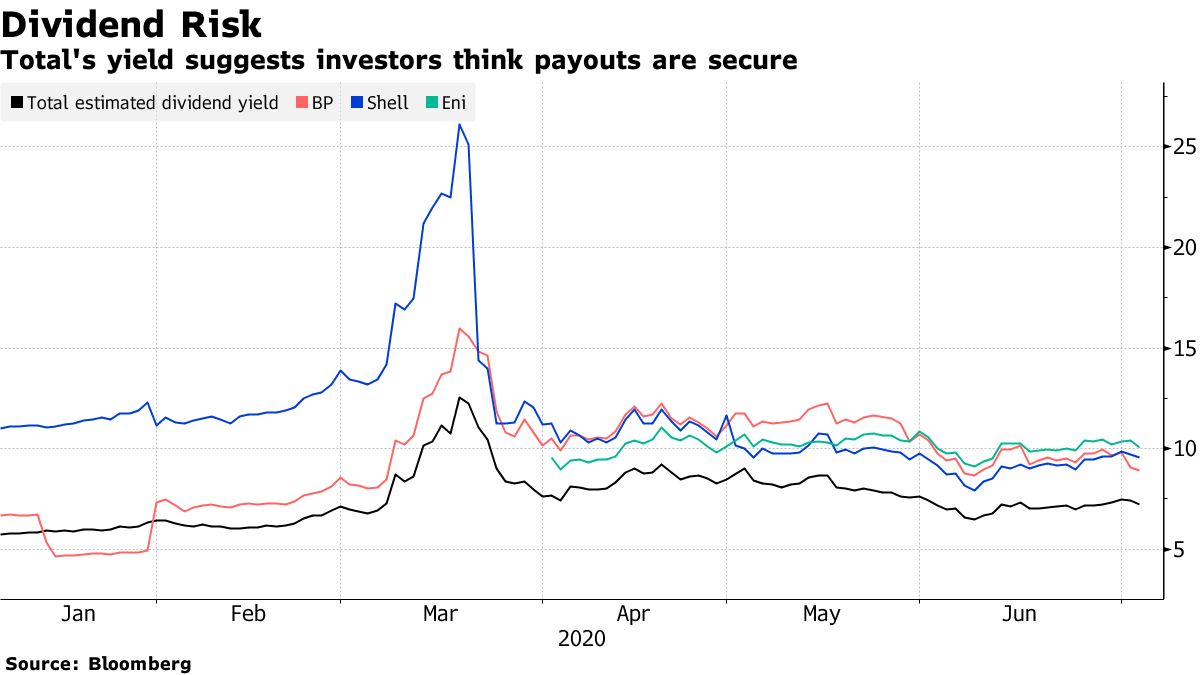 Its peers are not so well placed. Eni Spa’s dividend is “more challenged than most peers at lower commodity prices,” said Biraj Borkhataria, an analyst at RBC Europe Ltd. JPMorgan said a cut to BP’s dividend is “well flagged”, particularly after Shell’s cut in April.

Total can defend its dividend “even in an adverse scenario which would see the barrel staying around $40” said Regis Longlade, deputy chief executive officer of AG2R La Mondiale Gestion d’Actifs, which owns shares in Total and Shell. “It’s one of the most robust investment case in the industry. Total has one of the lowest breakevens in the market.”

Total now needs less than $25 a barrel to cover its annual expenditure excluding the dividend payment, a drop of more than 75% compared to what it needed back in 2014. It is benefiting from spending cuts initiated since the previous down turn five years ago and investments in low-cost barrels. Its upstream operating expenditure has almost halved since 2014 to $5.4 a barrel, the lowest among the five supermajors, according to Total. Its gearing — a measure of indebtedness — has also halved.

Writedown Woes
Yet Total may not be immune to another feature of the current downturn — multibillion dollar asset writedowns. Last month, BP announced as much as $17.5 billion of charges, its biggest in a decade, saying it expects the pandemic to accelerate the pace of transition to a lower carbon economy. Shell soon followed, warning that it expected a writedown of $15 billion to $22 billion.

“BP has made a major step forwards with its writedowns and the issue of financial risks linked with fossil energies,” said Aurelie Baudhuin, head of socially responsible investing research at Meeschaert Asset Management. “That will inevitably spill over to the entire industry one way or another.”

Total should follow that example, by giving more details on its roadmap to net zero emissions, and broaden its ambitions to incorporate a worldwide scope, said Baudhuin. Bruce Duguid, head of stewardship, EOS at Federated Hermes also wants Total to follow BP, which “recently changed their management and accounting assumptions to be consistent with a Paris-aligned outlook on demand.”

More Work Needed
Pouyanne is keeping pace with his rivals in the transition to clean energy. While Shell has set the ambition of becoming the world’s biggest power producer in 2030, Total has spent billions on electricity assets and plans to have more than 25 gigawatts of gross renewable generation capacity by 2025. It is targeting carbon neutrality for all its production and energy products used by its customers in Europe by 2050 or earlier.

Total bought French battery maker Saft Groupe SA in a 950 million-euro ($1 billion) deal in 2016. It further diversified into power in 2018 with the 2-billion euro acquisition of Direct Energie SA, France’s third-largest utility. It recently announced plans to build batteries for electric vehicles in France and China, expanded in the power sector in Spain, India and Qatar, and announced its first deal in offshore wind in the North Sea.

All these factors make Total one of the most attractive investments in the industry, especially since it trades at a discount to its peers, said AG2R’s Longlade.

“Its low breakeven, its gearing among the lowest in the industry, and the ability of its management to adjust quickly to the crisis would justify that Total trades at a premium,” he said.