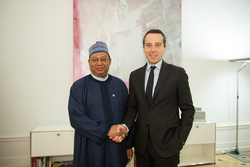 The Chancellor welcomed and congratulated Mr. Mohammad Barkindo on assuming the office as OPEC Secretary General, and conveyed support for his new role, noting that he has assumed office during a very turbulent and challenging time for the oil and gas industry, in particular, the world in general.

The Chancellor asked the Secretary-General concerning the latest situation facing the oil market and LNG’s, which continues facing challenges on various fronts, and on the future challenges for the oil industry, particularly for OPEC and Non-OPEC countries.

Both the Chancellor and the Secretary-General elaborated at length on the challenges facing the global oil and gas industries, including the challenge of stability in the oil market, and the close cooperation to resolve them.

They both expressed their desire for all OPEC and Non-OPEC Member Countries, to jointly take proactive measures to maintain stability on a sustainable basis in the interest of both consumer and producer countries.

The Chancellor expressed his interest in having further collaboration with the Secretary-General and his desire to increase his knowledge of OPEC’s efforts to stabilise the oil market, and both officials agreed to meet on a regular basis to exchange information. The Chancellor thanked the Secretary General for his visit.