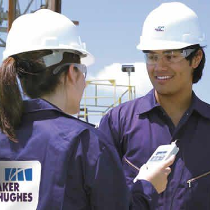 Baker Hughes also expressed optimism for 2019 and beyond

as international and offshore markets improve and new liquefied natural gas projects are being sanctioned.

Third-quarter profit per share missed analyst estimates by 1 cent on weakness in its turbomachinery and process solutions business, which includes turbines and compressors.

Shares of Baker Hughes slid more than 3 percent at one point and were down 2.4 percent at $25.96 in late morning trading.

Baker Hughes said the offshore sector, worst hit during the 2014 downturn, is recovering as international oil prices have climbed to around $75 a barrel. A rebound in rates companies receive for drilling services is expected by 2020.

“The offshore market is the strongest it has been in many years and the improving tender and order activity is an encouraging sign as we look out to 2019 and beyond,” Chief Executive Officer Lorenzo Simonelli said in a statement.

Baker Hughes sold its first blowout preventer since 2014 during the quarter, a sign demand for offshore equipment may be returning. A blowout preventer is a specialized valve used to control and monitor oil and gas wells.

The company said it feels “very positive” about the LNG market outlook. It expects more projects to be sanctioned in the second half after Royal Dutch Shell this month approved a $31.2 billion LNG export project in western Canada.

Baker Hughes said it conservatively estimates 65 million tonnes per year of LNG to be sanctioned by 2020.

“We think the market will increasingly appreciate Baker Hughes’s improving macro outlook and its leverage to the improving offshore, international and LNG markets,” James West, an analyst for Evercore ISI, wrote in a note.

Quarterly revenue in oilfield services, which accounts for over half of total sales, rose 12.5 percent from a year earlier to about $3 billion.

Although Baker Hughes has limited exposure to the North American pressure pumping sector, U.S. oilfield services firms have seen demand soften as producers cut spending due to transportation bottlenecks in the Permian basin.

Revenue from turbomachinery and process solutions dropped roughly 2 percent to about $1.40 billion.

Analysts had expected profits of 20 cents per share, according to Refinitiv data.