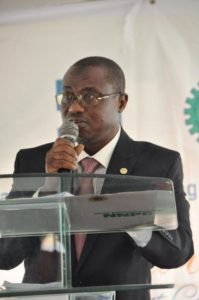 Baru noted this in an address at the NNPC Special Day at the 39th Kaduna International Trade Fair, which held in Kaduna from 23rd February to 4th March, 2018.

He said it was imperative to intensify and support the Federal government’s economic diversification programme to free the economy from the “vagaries of oil price volatility, which during a period of glut, could spell doom for the nation”.

The NNPC’s helmsman noted that a renewed focus on commerce, industry and agriculture would have a greater impact on the standard of living of Nigerians as “these sectors can engage more people in productive activities compared to oil and gas which despite its significance, accounts for only 12.7 per cent of the country’s Gross Domestic Product (GDP)”.

He assured the KADCIMA of NNPC’s participation in subsequent editions of the trade fair.

This was announced by the Kaduna Chambers of Commerce, Industry, Mines and Agriculture (KADCIMA) at the closing ceremony of the fair.

The corporation, which returned to the fair after a two-year absence, beat Dangote Industries and the Nigerian Ports Authority to second and third positions respectively to clinch the top prize at the 10-day event.

Speaking while presenting awards to outstanding participants at the closing ceremony, Governor of Kaduna State, Mallam Nasir El- Rufai, commended the NNPC and other participants at the fair for the quality products showcased as well as the innovation and grandeur they brought to bear on the event.

The Theme of the Fair was: “Promoting Industry, Commerce and Agriculture for International Competitiveness”.

Speaking earlier, President of the Kaduna Chamber of Commerce, Industry, Mines and Agriculture, Hajia Farida Dantata, who was represented by Alhaji Tijani Ahmed Musa said the absence of NNPC in the last two editions created a void at the fair.