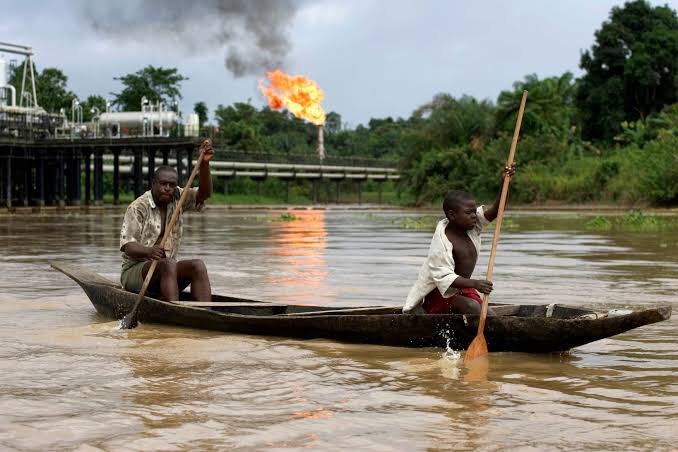 *Community dwellers paddling a canoe in the Nembe Creeks

Port Harcourt — Okoroma Clan in Nembe Local Government Area of Bayelsa, on Monday, issued 14-days ultimatum to the Nigerian Agip Oil Company, NAOC, to renew a MoU with the clan, or have their operations in the area shut.

Indigenes of Okoroma clan under the aegis of Okoroma Volunteers, a socio-cultural organization and pressure group of Okoroma clan, who gave the ultimatum explained that the MoU Agip had with them expired since 2011.

Spokesman of Okoroma Volunteers, Mr. Ubani Godwin, said the people have been grossly marginalized by NAOC, as jobs reserved for members of the clan, was being diverted since the expiration of the MoU.

Godwin advised NAOC to refrain from awarding contracts meant for them to others in the state or consider shutting down their operations in the area.

He explained that anytime the people of Okoroma attempt to agitate against this ill-treatment, there are few saboteurs from the Clan who feed on crumbs from Agip that are used to counter the people’s demands.

According to him, the the saboteurs resort to blackmail of different types just to deny the development agenda of the clan, thereby denying the Clan of its legitimate benefits.

“Today, we stand as the only Clan in Nembe LGA that is host to all Agip flow stations and oil producing wells but as we speak, the last time the company signed any Memorandum of Understanding with us was in 2006.

“As we speak, other clans in Nembe LGA are benefiting from Agip’s oil and gas pipeline surveillance contract but in our own case, the contract of our Clan is awarded to persons from neighbouring Communities.

“The beneficiaries of these unfair treatments to us in Okoroma are those that are very close to the government, thereby leaving our men, women and youths unemployed.”

The people further lamented that despite being the only Clan that has Agip crude oil producing wells and flow stations in the entire Nembe LGA, they are never considered for employment into the company.

Godwin explained that since crude oil exploration started in the area, communities from the Clan have been continuously denied the opportunity to benefit from oil and gas wellhead and pipeline surveillance contracts from Agip.

He said that it was regrettable that as owners of the land hosting the crude oil flow stations, Agip had continued to give their benefits to some persons in neighbouring communities, thereby leaving them in total neglect.

“To put the record straight at this point, in 2006 when we protested against Agip for failing to meet up with its corporate social responsibility just as they are doing today.

“They employed to services of military men who fired gunshots into the crowd of peaceful protesters, killing a young man named Erefagha Oyagiri.

“Our message to Agip this time is the fact that, we have resolved as a people that no number of military presences would deter us from shutting down the activities of Agip in our Communities at the expiration of our 14 days ultimatum to them.

“We promise them that if they try to stop us this time, they would have to kill all of us in the process.”