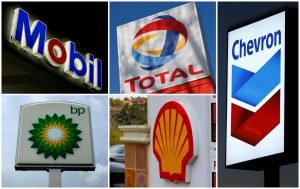 London — Investors already braced for poor first-quarter earnings from major oil and gas companies next week will focus on how executives plan to save cash and whether they will cut dividends following the collapse in oil prices.

The five biggest U.S. and European firms, known as the Oil Majors, have announced spending cuts averaging 23% in a rapid response to the precipitous fall in oil demand because of the coronavirus pandemic and a 65% slump in crude prices.

With the rout likely to extend for months, the pressure on balance sheets remains extreme as very few parts of oil company businesses make money at the current oil price of $20 a barrel.

From Exxon Mobil to Royal Dutch Shell, companies have put projects on hold, slashed production in U.S. shale fields and reduced operations at refineries to deal with the double whammy of a drop in demand and a supply glut.

But more steps are likely to be needed and investors will be watching closely for changes to output forecasts and to see how companies plan to manage dividends, the most important incentive for shareholders worth more than $40 billion combined last year.

“The look back into what was a weak first quarter seems almost irrelevant. The game plan for dealing with the next three months and the next 18 months is going to be the focus,” said Jefferies analyst Jason Gammel.

BP will be the first Oil Major to report first-quarter results on Tuesday, with Shell on Thursday, Exxon and Chevron on Friday and France’s Total on May 5.

Italy’s ENI reported a 94% slump in net profit on Friday and lowered its spending and production forecasts while Norway’s Equinor will report on May 7.

Oil company boards have historically refrained from cutting dividends during previous crises, resorting to measures such as borrowing money or offering discounted shares instead of cash.

But Equinor surprised the market on Thursday by becoming the first big oil company to cut its dividend, slashing its first-quarter payout by two thirds and suspending a $5 billion share buyback programme.

Exxon, for example, issued $18 billion of bonds in March and April, up from $7 billion in total last year while Shell has lined up a over $20 billion in new financing in recent weeks.

Some investors, however, have called on them to break the dividend taboo instead, because debt levels are already high.

The sector’s dividend yield – the ratio of the dividend to the share price – soared to its highest in decades following the slide in oil prices and stock markets in the first-quarter. A high dividend yield can imply investors are assigning a higher degree of risk to a company’s dividend.

Jennifer Rowland, an analyst at Edward Jones, said the dividend outlook was stable for Exxon, Chevron, Shell and Total though BP may have to look at its dividend payouts. “Unlike peers, BP’s balance sheet is not yet strong enough to withstand a prolonged period of low commodity prices,” she said.