Big oil is about to bury skeptical investors in cash pile

14 October 2018, London — Investors still haven’t forgiven oil companies for being ill-prepared for a crude-price collapse four years ago. Perhaps more than half a trillion dollars will change their minds.

With oil above $80 a barrel as costs remain at an eight-year low, the industry is seeing green. In 2018 alone, it will rake in as much extra money as it did in the previous five years combined, according to consultant Rystad Energy AS. You could liquidate Facebook Inc. and it wouldn’t touch what oil companies will generate in free-flowing cash over the next three years.

They may need every dollar. So far nothing oil companies have done — from $25 billion buyback programs to better earnings than in the days of $115 oil — has gotten them out of the doghouse with investors. Share-price increases have fallen well behind the surge in crude, while in the U.S., oil companies haven’t kept up with broader index gains. 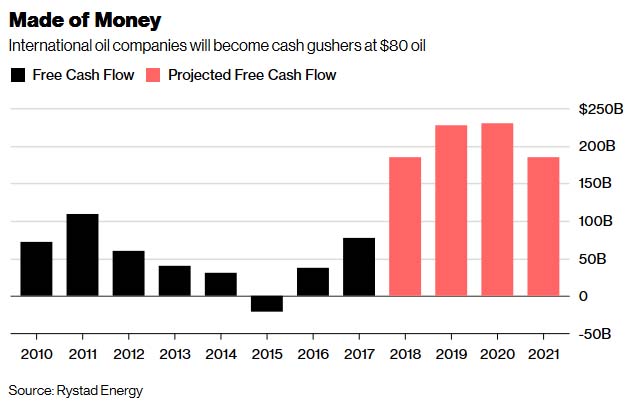 “The comeback in free cash flows has only gradually started to be visible,” Espen Erlingsen, a partner at Rystad, said by email. Investors are probably “waiting to see how these oil companies will spend the extra money.”

Free cash flow at international oil companies is expected to more than double this year, to a record $175 billion. Then it will rise again in 2019, to close to $200 billion, and stay around that level for at least two years after that, according to Rystad.

The estimate comes with a big caveat. Oil prices can’t fall from today’s level of more than $80 a barrel, and companies can’t return to pre-crash spending heights.

There are reasons to doubt the sustainability of crude’s rally. Oil prices have surged in the past year, in part because a snap-back of U.S. sanctions on Iranian exports is driving fears of supply shortages. BP Plc Chief Executive Officer Bob Dudley said those concerns could subside by the end of the year and that prices “feel high.”

Investors are also uncertain whether they can trust oil company executives to exercise restraint as crude keeps soaring. Firms committed to increasingly large projects, buoyed by a bullish crude market from 2008. By 2014, when prices collapsed, costs and investments for international oil companies rose to $560 billion, while free cash flow fell to less than $50 billion, not enough to cover dividend payments, Rystad data show.

While the same companies cleaned up their balance sheets and are now more profitable than before the price crash, investor confidence in the sector hasn’t been fully restored. The S&P 500 Energy Index has gained about 9 percent this year, lagging behind U.S. crude’s 23 percent increase. 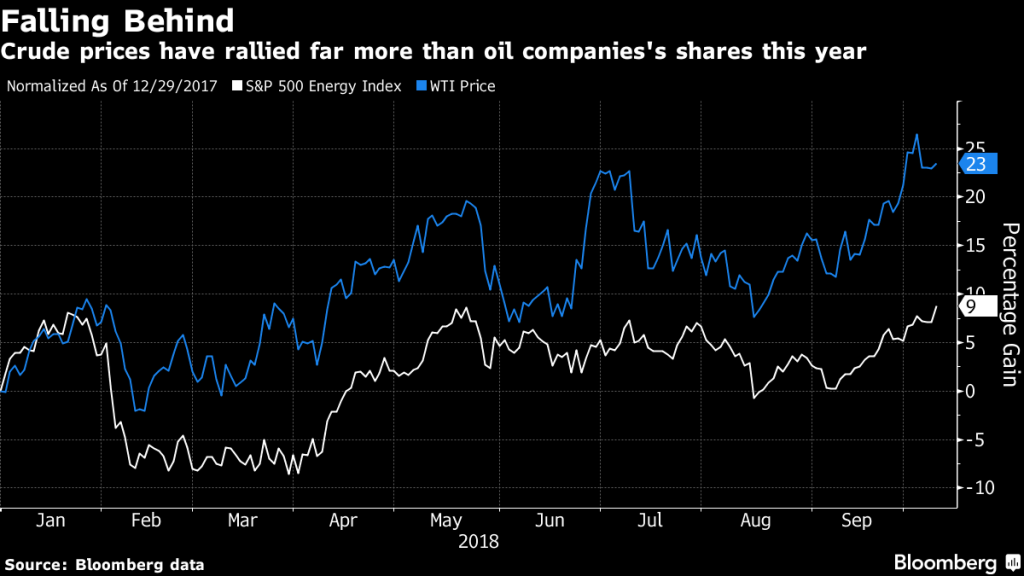 “The concern of some investors is that capital discipline isn’t really here to stay,” said Jason Gammel, an analyst at Jefferies LLC. “We’re not that far into the recovery yet.”

Executives will have the chance to make their case this week at the Oil & Money conference in London, which kicked off Tuesday.

Investors have heard austerity pledges after previous down cycles in the oil price, only to abandon the idea when crude shot back up, said Gammel. The big cash flow figures would have to actually materialize, accompanied by sustained efforts to return extra-money to shareholders, to win back trust.