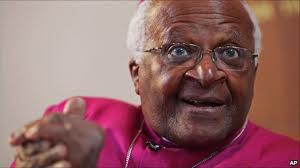 11 April 2014, News Wires – Nobel peace prize winner Archbishop Desmond Tutu has called for an “anti-apartheid-style” boycott campaign against fossil fuel companies as he lashed out at the Keystone XL pipeline plan in the US in particular over the climate change crisis.

Writing an opinion piece in the UK’s Guardian newspaper, the South African called on all energy companies to change their ways and increasingly turn from fossil fuels to renewable energy, while criticising the greed prevalent in the industry and wider society.

“Twenty-five years ago people could be excused for not knowing much, or doing much, about climate change. Today we have no excuse,” Tutu said ahead of an Intergovernmental Panel on Climate Change report due out on Sunday.

“This is why, no matter where you live, it is appalling that the US is debating whether to approve a massive pipeline transporting 830,000 barrels  [per day] of the world’s dirtiest oil from Canada to the Gulf of Mexico.” Tutu contended that the pipeline, should US President Barack Obama give it the go-ahead, could raise Canada’s carbon emissions by more than 30%.

In its Final Supplemental Environmental Impact Statement (FEIS) released earlier this year, the US State Department said the proposed $5.4 billion pipeline would not have a significant impact on greenhouse gas emissions, nor lead to increased production out of the Canadian oil sands.

“The bottom line is that we have 15 years to take the necessary steps. The horse may not have bolted, but it’s well on its way through the stable door,” the religious leader proclaimed.

“There are many ways that all of us can fight against climate change: by not wasting energy, for instance. But these individual measures will not make a big enough difference in the available time.

“People of conscience need to break their ties with corporations financing the injustice of climate change. We can, for instance, boycott events, sports teams and media programming sponsored by fossil-fuel energy companies. We can demand that the advertisements of energy companies carry health warnings. We can encourage more of our universities and municipalities and cultural institutions to cut their ties to the fossil-fuel industry.”

Although Tutu conceded that the general public “cannot necessarily bankrupt the fossil fuel industry”, he contended that it “can take steps to reduce its political clout, and hold those who rake in the profits accountable for cleaning up the mess”.

Tutu ended his diatribe by saying: “It makes no sense to invest in companies that undermine our future. To serve as custodians of creation is not an empty title; it requires that we act, and with all the urgency this dire situation demands.”