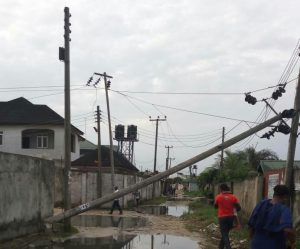 One of the damaged electricity poles at the Federal Housing Estate, Rumueme, Port Harcourt

09 May 2018, Sweetcrude, Port Harcourt – A greater part of Port Harcourt metropolis is currently in darkness following a heavy rainstorm on Tuesday, which destroyed about 85 electricity poles belonging to the Port Harcourt Distribution Company, PHED.
The affected areas include Rumuola, Bori Camp, Rukpokwu, Rumuomoi, Federal, Wokoma, Agip Estate, Rumueme and GRA Phase II.
The rainstorm which lasted less than an hour on Monday night and in the early hours of Tuesday, is believed to have been so destructive as a result of climate change.
Speaking on the development which  culminated in the loss of power supply to the affected areas, the management of the Port Harcourt Electricity Distribution Company, confirmed that over seven transformers were also affected.
The Acting Chief Executive Officer, PHED, Mr. Syed Taha, appealed to the customers in affected areas to exercise patience while the damaged poles are being replaced, despite the huge money it would cost the company.
According to him, “About 85 high tension poles belonging to the Port Harcourt Electricity Distribution Company were destroyed by heavy wind, during the downpour that occurred in Port Harcourt on Monday evening and early Tuesday morning.
“As a result, damaged poles with other associated materials such as 150mm aluminum conductors spanning over 32,000 metres, several cross arms, among others, have thrown a cross section of Port Harcourt metropolis into darkness.
“In the wake of the loss, two 33KV and five 11KV feeders, namely UST 33KV and Rumuola 33KV, were affected. Others on 11KV were Rumuomoi, Federal, Wokoma, Bori Camp and Rumuola.”
Taha also empathized with the members of the public who may have lost their valuables during the heavy rain.
He, however, warned the general public on the dangers of trading or erecting structures under high tension lines, urging the public to always obey safety rules especially during the raining season.
“It is regrettable that PHED is facing such a loss at this moment, due to natural disaster but I can guarantee that supply will be restored to the affected areas soonest, because we have taken stock of the extent of the damage and sourcing of materials for rehabilitation has started in earnest,”  Taha assured.
It should be noted that apart from the havoc on electricity poles, the rainstorm also deroofed buildings at Elechi Amadi Polytechnic, Rumuola and also at Model Primary School, GRA Phase II, all in Port Harcourt.