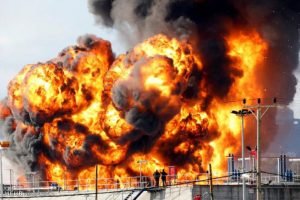 Moscow — A blast at an oil facility in Russia’s Tatarstan region killed two people and injured one person on Friday, the Interfax news agency cited a source as saying.

Tatneft, the largest oil producer in the region, said the incident was not related to any of its facilities.

TASS news agency, citing a source at emergency services, said a reservoir has been damaged during testing works at a firm called “Small Oil Companies of Tatarstan”. It said two people had died and one was injured.