Lagos — Hydrogen markets are taking off around the world, and GlobalData expects low-carbon hydrogen production in North America to nearly triple by 2030, reaching 1.4 million tons per annum (mtpa). The leading data and analytics company notes that North America’s transition has been driven by blue hydrogen, which is expected to make up 85% of low-carbon hydrogen capacity by 2030.

According to GlobalData’s latest report, ‘North America Hydrogen Market – Overview, Demand, Policies, Deals and Key Players’, North America has been increasing investments in new sectors for hydrogen, such as transportation, green fuels, and power, in line with the global trend toward hydrogen as a clean energy transition fuel. 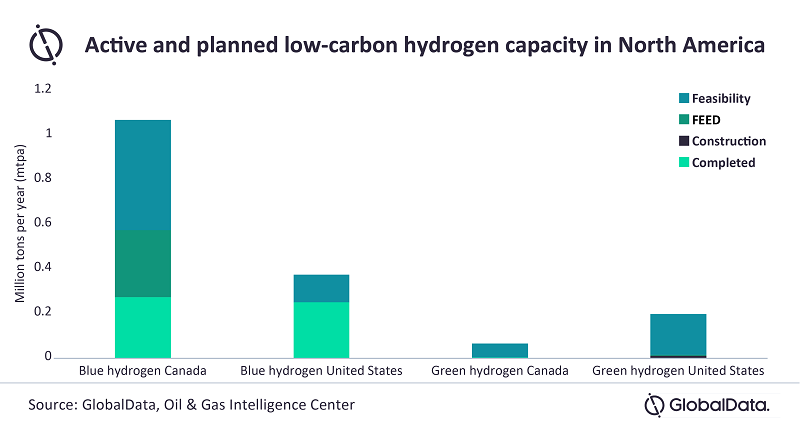 Miles Weinstein, Energy Transition Analyst at GlobalData, comments: “Blue hydrogen production in North America is some of the cheapest in the world due to low natural gas prices and an abundance of suitable sites for geological carbon storage. Still, the cost of blue hydrogen production in the US is $1.52/kg, compared to $1/kg for grey hydrogen. While Canadian costs are comparable, Canada leads the US in blue hydrogen due mainly to existing natural gas extraction and carbon sequestration infrastructure, as well as funding for low carbon vehicles and fuels. In most other global regions, however, the capacity of green hydrogen plants far outpaces that of blue due to higher natural gas prices or, in some cases, cheap renewable electricity.

“While blue hydrogen is more expensive to produce than grey, US tax credits for carbon capture and storage effectively reduce the cost of blue hydrogen to $1.26/kg, reaching $1.11/kg by 2026. A similar tax credit is currently under consideration in Canada.”

Producers of green and blue hydrogen in North America are targeting the transportation sector more than any other as a potential market. Meanwhile, automotive manufacturers, oil and gas companies, and others are beginning to build up a value chain for fuel cell electric vehicles (FCEVs) and hydrogen fuelling infrastructure. This is evidenced by recent industry partnerships, deals, and other activity in the hydrogen transportation sector, including a high-profile alliance between Chevron and Toyota to catalyze hydrogen transportation markets. Companies such as US-based Nikola Motor and ZeroAvia, have centered their business on medium- and heavy-duty hydrogen vehicles and hydrogen powered aircraft, respectively.

Weinstein continues: “Current demand in the transportation sector is mainly limited to a niche market in California due to the state’s Low Carbon Fuel Standard. With similar policy intervention or direct cost reductions, transportation can become a competitive sector for hydrogen use in the rest of North America as well.”

A recent surge in the number of hydrogen deals in North America underpins the sector’s growing popularity, with 2021 already a record-breaking year in terms of the total reported deal value. At $4.6bn, the reported value is 60% greater than from 2016-2020 combined. Additionally, 37 industry partnerships have been made in 2020-21, many of which are focused on developing green hydrogen production.

Hydrogen remains a key component to the clean energy transition, particularly in hard-to-abate sectors such as heavy-duty transport and industry. However, the price gap between grey and blue/green hydrogen must be addressed by policy incentives or direct cost reductions.

Weinstein adds: “In the case of green hydrogen, a concerted R&D effort will be necessary to reduce CAPEX. Finally, the ongoing build-up of a hydrogen value chain lends confidence that the necessary infrastructure will be in place to meet growing demand.”