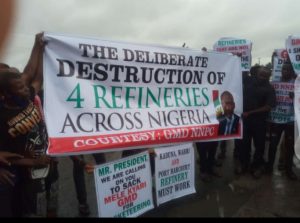 Port Harcourt — A protest by three oil unions in the country is currently ongoing outside the Port Harcourt Refinery complex, with the oil workers demanding the removal of the Group Managing Director of Nigerian National Petroleum Corporation, NNPC, Mele Kyari.
The unions are the Petroleum Tanker Drivers, PTD, arm of the National Union of Petroleum and Natural Gas Workers, NUPENG; the Independent Petroleum Marketers Association, IPMAN; and the Independent Marketers branch of NUPENG.
Armed with placards and banners bearing several inscriptions, the unions are demanding  the removal of the Group Managing Director of NNPC
Mele Kyari, by President Muhammadu Buhari, over alleged incompetence.
Chairman of IPMAN, PHRC Unit, Comrade Obelle Ngechu, said the GMD of NNPC should be sacked for his inability to fix the nation’s four refineries.
Chairman of PTD, PHRC Unit, Johnbosco Bosco, said the non-functioning of the nation’s four refineries has brought untold hardships to over 10 million  Nigerians who feed from the refineries and depots.
The Chairman of Independent Marketers branch of NUPENG, Comrade Uche Stanley, vowed that the union will embark on a strike if their demand for the refineries to be fixed are not met by the Federal Government.