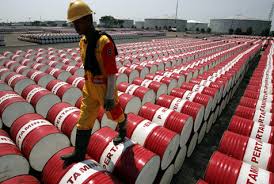 28 July 2014, News Wires – Brent crude slipped below $108 a barrel on Monday as fighting between Israel and Hamas Islamist militants subsided in Gaza, but some analysts said falls may be limited.

Geopolitical tensions in the Middle East eased for now after Hamas said it backed a 24-hour humanitarian truce. US President Barack Obama had called for a ceasefire but there was no sign of any comprehensive deal to end fighting with Israel.

US crude futures for September delivery dropped 52 cents to $101.57 a barrel after ending last week 1% lower.

“Oil markets are going down because of a ceasefire for 24 hours in Israel and Gaza,” said Ken Hasegawa, a commodity sales manager at Newedge Japan. “This has definitely put some pressure on oil.”

Oil remained underpinned by tension in hotspots such as Libya and eastern Ukraine despite ample supply of crude and oil products globally.

“I would expect to see some buying support around these levels it is trading at right now,” said Ben Le Brun, a markets analyst at OptionsXpress in Sydney.

“We are still keeping a very, very close eye on what’s happening in the Middle East at the moment, so that should say oil prices are quite well supported.”

Libyan Special Forces and Islamist militants clashed over the weekend, resulting in at least 36 deaths in Libya’s eastern city of Benghazi.

The US and the European Union prepared more economic sanctions on Russia over the Ukraine conflict, where fighting has intensified in the east.

Global markets may also see more oil exported out of Iraqi Kurdistan after the US Coast Guard cleared a tanker to unload a cargo off Texas on Sunday. A State Department official signalled that Washington would not intervene to block delivery of the controversial crude.

Investors are gearing up for more economic data from the US later this week, including second-quarter GDP figures, to gauge the health of the world’s largest economy.

“There’s going to be very strong economic data coming out of the US and perhaps traders are doing a little bit of position-squaring before the data comes out,” Le Brun said.