Buhari hints at $15 billion deal after meeting with Shell CEO 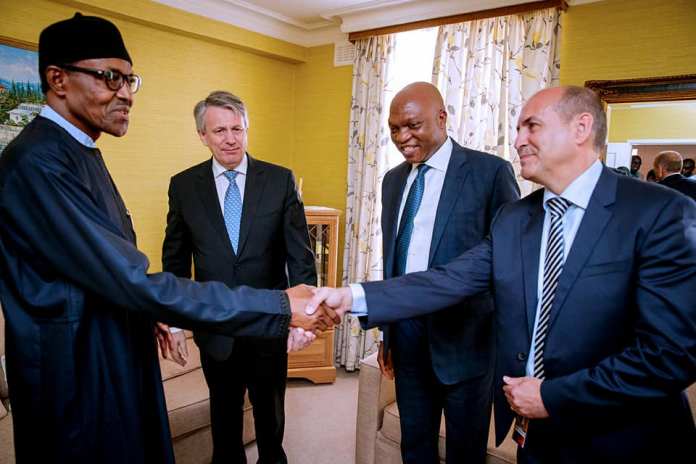 *Says ‘we are not doing too badly’

The meeting, which was facilitated by the Minister of State for Petroleum, Dr. Emmanuel Ibe Kachikwu, and announced on the ministry’s twitter handle, also had in attendance the Group Managing Director of the Nigerian National Petroleum Corporation (NNPC), Dr. Baru Maikanti.

“Yesterday, the HMSPR, Dr. @IbeKachikwu facilitated a key investment meeting between the President of Nigeria, @MBuhari and Royal Dutch @Shell Plc. led by the CEO, Bernardus van Beurden. The meeting presented an opportunity to open investment talks of up to $15 billion in Nigeria,” the tweet stated.

No further details were presented on the timeline, but a statement from the president’s spokesman quoted the President Buhari as saying: “I saw Shell Group, they came here, they saw me, they are preparing to invest $15 billion in Nigeria… so really, we are not doing too badly,”

Buhari said to applause at the Commonwealth Business Forum in London. He was speaking as part of a panel on the ease of doing business between Commonwealth countries.

Shell confirmed to reporters that the meeting had taken place, but did not comment on the size of the specific investment.

A spokesperson added that “Nigeria is an important country for Shell. We see good opportunities there for potential investment,” referencing its Bonga offshore oil field and the expansion of liquefied natural gas as examples of this.

“Both projects are subject to a future final investment decision and we continue to work with our partners and the government towards that in each case.”

Shell’s statement added: “The potential investments feature as options in our long-term plans and would fit within our capital spending range of $25 to $30 billion per year if we decide to go ahead with them.”

Oil price volatility has hit Nigeria’s economy — the largest on the African continent — hard. In 2016, the country suffered its first full-year recession in 25 years. Economic growth remains sluggish, expected by the International Monetary Fund (IMF) to be 2.1 percent for 2018, well below the emerging market average of 4.9 percent.

Oil accounts for approximately 35 percent of Nigeria’s gross domestic product, according to the Organization of the Petroleum Exporting Countries (OPEC), of which Nigeria is a member.

Buhari referenced that, as of October, Nigeria had risen 24 places in the World Bank’s Ease of Doing Business ranking to 145th out of a total of 190 economies.

“We acknowledge that much more is to be done,” he said. “We are now in the next stage, this is work in progress.”