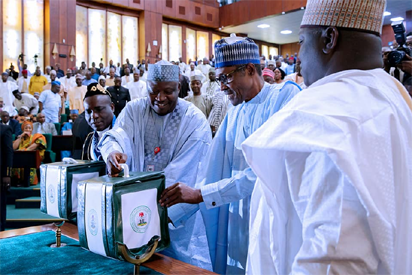 He said at the session that with a benchmark of 45 dollars per barrel at an exchange rate of N305 to a dollar in 2018, the budget would consolidate on the achievements of previous budgets to aggressively steer the economy to the path of steady growth.

Dubbed the ‘budget of consolidation,’ the budget was about 16 per cent increase from the N7.44 trillion appropriated in 2017.

The figures were contained in the 2018-2020 Medium Term Expenditure Framework and Fiscal Strategy Paper, which Buhari had earlier sent to the National Assembly in compliance with the provisions of the Fiscal Responsibility Act, 2007.

President Buhari said that the government would continue to develop infrastructure and increase investments in agriculture to attain food security and reduce importation.

He added that while the Federal Government was committed to identifying alternative means of funding new projects, there was need to continue to pursue public private partnership, to provide more infrastructure in the country.

The president announced that the budget is projected at an oil price of $45 per barrel and an estimate of 2.3 million barrels per day.

He added that the budget is further projected on an exchange rate of N305 to $1, a real Gross Domestic Growth of 3.5 per cent and inflation rate of 12.4 per cent.

According to him, the Federal Government has been able to construct or rehabilitate about 776-kilometer roads in 2017.

The president said that the construction of Abuja Metroline had attained 98 per cent completion, adding that work had commenced on the Ajaokuta-Itakpe rail line which was abandoned for 17 years.

He said that the project would be delivered in September 2018, adding that the country’s power sector would witness a turn around.

“The power sector reform is still working in progress as we have increased power generation but we still have some challenges in transmission and distribution network,” Buhari said.

He added that the Federal Government was committed to green alternative energy.