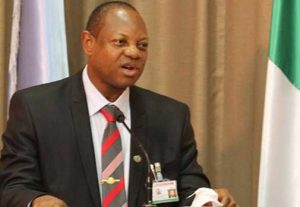 In a statement signed by his Special Adviser on Media and Publicity, Chief Femi Adesina, President Buhari also approved the appointment of Professor Charles Quaker Dokubo as the new Coordinator of the Amnesty Programme.

There were indications that President Muhammadu Buhari may have sacked Brig.-Gen. Paul Boroh over graft-related issues bothering on the embezzlement of funds meant for the programme.

It was also learnt that the Presidency may not have been satisfied with the explanations he gave regarding the allegations.

Prof. Dokubo also holds a PhD in Strategic Studies from the University of Bradford, United Kingdom, and hails from Abonema, Akuku-Toru Local Government of Rivers State.

A statement by the presidential spokesman, Mr. Femi Adesina, had also indicated that the National Security Adviser (NSA) Babagana Monguno should carry out a full investigation into the activities of the Amnesty Programme from 2015 to date.

But Boroh, shortly after he emerged from the meeting with the President last week Friday, described such pressures as the handwork of those who wanted the old system of corruption and embezzlement to continue.

Some of the ex-agitators had accused him of mortgaging their future, prompting them to stage a protest at Opokuma Junction axis of East-West Road and Igbogene gateway, in Yenagoa Local Government Area of Bayelsa State, recently.

They alleged that the programme had been hijacked by Northerners, citing a lack of consultation, non-performance and diversion of funds meant for the implementation of the programme by officials.

Boroh, who was appointed in July 2015, had reacted to these allegations, saying, “I want to let you know that what is happening in the Amnesty Programme is no more business as usual, that is the bottom line of all that is happening.

“The programme actually is a security programme that has to do with critical stakeholders who drive the process. I’m only there to supervise what they are doing so that we can achieve the aim for which the programme was established, to ensure youth restiveness is not allowed and ensure peace and stability of the Niger Delta region.”